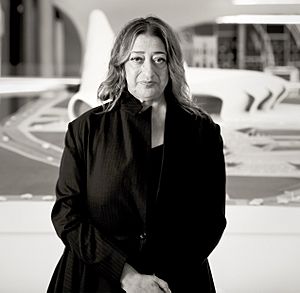 Hadid's buildings are neo-futuristic, characterized by curving forms with "multiple perspective points and fragmented geometry to evoke the chaos of modern life".

On 31 March 2016, Hadid died of a heart attack in a Miami hospital, where she was being treated for bronchitis, aged 65.

All content from Kiddle encyclopedia articles (including the article images and facts) can be freely used under Attribution-ShareAlike license, unless stated otherwise. Cite this article:
Zaha Hadid Facts for Kids. Kiddle Encyclopedia.