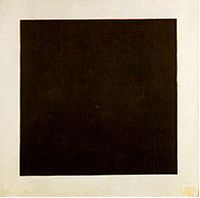 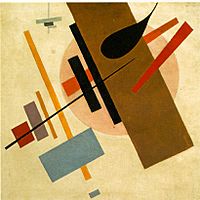 Suprematism is an abstract art movement started in Russia, 1915/1916. It focussed on basic geometric forms such as the square and circle. It is an example of geometric abstraction.

Suprematism was founded by Kazimir Malevich. In his book The Non-Objective World, published abroad as a Bauhaus Book in 1927, Malevich described the inspiration which brought about the powerful image of the black square on a white ground:

I felt only night within me and it was then that I conceived the new art, which I called Suprematism.

He created a suprematist 'grammar' based on fundamental geometric forms; in particular, the square and the circle. In 1915, Malevich exhibited his early experiments in suprematist painting. The centerpiece of his show was the Black Square, placed in what is called the red/beautiful corner in Russian Orthodox tradition, the place of the main icon in a house. "Black Square" was painted in 1915 and was a breakthrough in his career and in art in general. Malevich also painted White on White which marked a breakthrough from polychrome to monochrome suprematism.

Some of the titles to paintings in 1915 express the concept of a non-euclidean geometry which imagined forms in movement, or through time; titles such as: Two dimensional painted masses in the state of movement.

The Supremus group met from 1915 onwards to discuss the philosophy of suprematism and its development into other areas of life. There was some crossover with constructivism, with suprematists such as Lyuba Popova and especially El Lissitzky working on propaganda and industrial design.

Nikolai Suetin used suprematist motifs on works at the St. Petersburg Lomonosov Porcelain Factory where Malevich and Chashnik were also employed, and Malevich designed a suprematist teapot. The suprematists also made architectural models in the 1920s which offered a different conception of socialist buildings to those developed in constructivist architecture.

Malevich's architectural projects were known after 1922 Arkhitektoniki. Designs emphasized the right angle, with similarities to De Stijl and Le Corbusier, and were justified with an ideological connection to communist governance and equality for all. Another part of the formalism was low regard for triangles which were dismissed as ancient, pagan, or Christian.

This development in artistic expression came about when Russia was in a revolutionary state, ideas were in ferment, and the old order was being swept away. As the new order became established, and Stalinism took hold from 1924 on, the state began limiting the freedom of artists. From the late 1920s the Russian avant-garde experienced direct and harsh criticism from the authorities and in 1934 the doctrine of socialist realism became official policy, and prohibited abstraction and different artistic expression.

All content from Kiddle encyclopedia articles (including the article images and facts) can be freely used under Attribution-ShareAlike license, unless stated otherwise. Cite this article:
Suprematism Facts for Kids. Kiddle Encyclopedia.