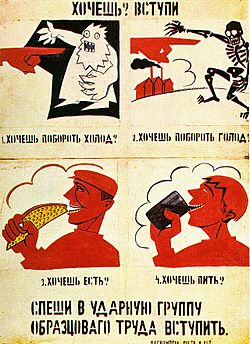 Constructivism was an artistic and architectural movement that originated in Russia from 1913 by Vladimar Tatlin onward which rejected the idea of art for art's sake in favour of art for social purposes. It heavily influenced graphic and industrial designers.

Constructivism as an active force lasted until around 1934, having a great deal of effect on the art of the Weimar Republic and elsewhere, before being replaced by Socialist Realism. Its motifs have sporadically recurred in other art movements since.

All content from Kiddle encyclopedia articles (including the article images and facts) can be freely used under Attribution-ShareAlike license, unless stated otherwise. Cite this article:
Constructivism Facts for Kids. Kiddle Encyclopedia.