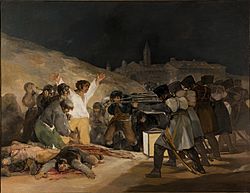 Social realism is a style of art, fiction, movies and plays. It describes the daily life of workers and poor people. Social realist artists try to show people and their lives in a realistic way. This means that they often show things which are not beautiful or attractive. They may show people who are elderly, sick, sad, insane or have a disability. This does not mean that a Realist work of art or literature is ugly. It can be made beautiful by the way that the artist or writer creates it.

Social realism art does not belong to one period of history, but has been the style of some artists in different centuries and different countries. Caravaggio, who was a late Renaissance artist, painted "Realist" pictures. Several Spanish painters were "Realists": Velazquez, Esteban Murillo and Francisco de Goya. There were many realist painters in the 19th century, including Gustave Courbet in France and Luke Fildes in England.

Social Realism was popular in Russian art and literature. In the 20th century it became the main type of literature in the Soviet Union. It was also used by David Siqueiros to depict daily struggles of the people in his country, Mexico.

All content from Kiddle encyclopedia articles (including the article images and facts) can be freely used under Attribution-ShareAlike license, unless stated otherwise. Cite this article:
Social realism Facts for Kids. Kiddle Encyclopedia.