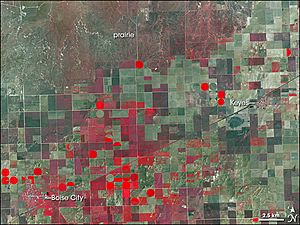 Cimarron County is the westernmost county in the U.S. state of Oklahoma. As of the 2010 census, the population was 2,475, making it the least-populous county in Oklahoma. Its county seat is Boise City.

Located in the Oklahoma Panhandle, Cimarron County contains the only community in the state (Kenton) that observes the Mountain Time Zone. Black Rock Mesa, the highest point in the state, is in the northwest corner of the county. Throughout most of its history it has had both the smallest population and the lowest population density of any county in Oklahoma.

Cimarron County was created at statehood in 1907. Before the Oklahoma Organic Act was passed in 1890, the area had belonged to what was known as "No Man's Land," also referred to as the "Public Land Strip." This was a relatively lawless area, with no organized government, and several outlaws sought refuge within its borders. In 1890, the strip became known as Beaver County, Oklahoma Territory. Informally, it was known as the "Oklahoma Panhandle." There were only two communities in the strip. One, Carrizo, had 83 residents in 1890, while the other, Mineral City, had 93 residents. Otherwise, the land was used primarily by sheepherders from New Mexico.

Railroads came late to this part of Oklahoma. The Elkhart and Santa Fe Railway built a line from Elkhart, Kansas through Cimarron County in 1925. It completed the link into New Mexico in 1932. Service ended in 1942. The same company built a line from Colorado to Boise City in 1931 and extended it into Texas in 1937. This line still operates and in 2000 was part of the BNSF system. 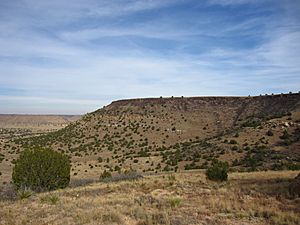 Black Mesa, the highest point in Oklahoma, is in the northwestern corner of Cimarron County.

The northern part of the county is drained by the Cimarron River, which flows eastward, then turns north into Kansas, The southern part is drained by the North Canadian River (also called the Beaver River). The man-made Lake Carl Etling lies inside Black Mesa park. 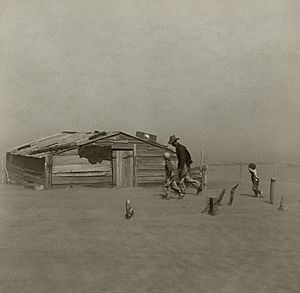 Farmer and two sons during a dust storm in Cimarron County, 1936 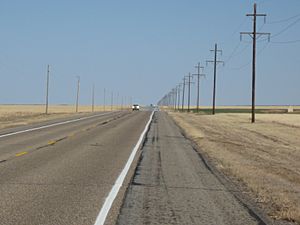 All content from Kiddle encyclopedia articles (including the article images and facts) can be freely used under Attribution-ShareAlike license, unless stated otherwise. Cite this article:
Cimarron County, Oklahoma Facts for Kids. Kiddle Encyclopedia.