Morton County (standard abbreviation: MT) is a county located in the U.S. state of Kansas. As of the 2010 census, the county population was 3,233. The largest city and county seat is Elkhart.

In 1848, after the Mexican-American War, the Treaty of Guadalupe Hidalgo with Spain brought into the United States all or part of land for ten future states, including southwest Kansas.

In 1854, the Kansas Territory was organized, then in 1861 Kansas became the 34th U.S. state. In 1886, Morton County was established, and named for Oliver Morton, who was a United States Senator from Indiana from 1867 to 1877. In 1886, the community of Richfield was established as the county seat. 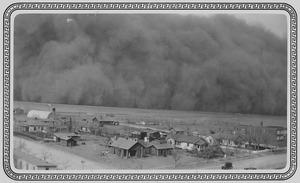 In the 1930s, the prosperity of the area was severely affected by its location within the Dust Bowl. This catastrophe intensified the economic impact of the Great Depression in the region.

In 1961, the county seat was moved from Richfield to Elkhart.

In 2007, the Federal Communications Commission moved Morton County into the Wichita, Kansas media market, along with the rest of western Kansas. Previously it was part of the Amarillo, Texas market. 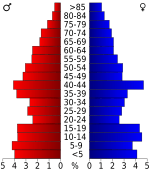 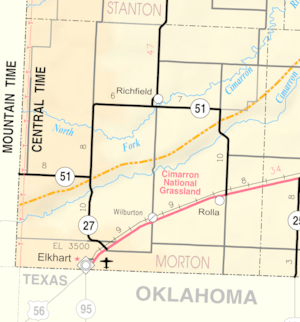 Morton County is divided into six townships. None of the cities within the county are considered governmentally independent, and all figures for the townships include those of the cities. In the following table, the population center is the largest city (or cities) included in that township's population total, if it is of a significant size.

All content from Kiddle encyclopedia articles (including the article images and facts) can be freely used under Attribution-ShareAlike license, unless stated otherwise. Cite this article:
Morton County, Kansas Facts for Kids. Kiddle Encyclopedia.