The Territory of Kansas was a territory of the United States that existed from May 30, 1854, until January 29, 1861. This was when the eastern portion of the territory was admitted to the Union as the state of Kansas.

Site No. JF00-072: Nebraska–Kansas state line at intersection of Nebraska counties Thayer and Jefferson and Kansas counties Washington and Republic.

Section 19
Defines the boundaries of the Territory, gives it the name of Kansas, and states that "when admitted as a State or States, the said Territory, or any portion of the same, shall be received into the Union with or without slavery, as their constitution may prescribe at the time of their admission." It further provides for its future division into two or more Territories, and the attaching of any portion thereof to any other State or Territory; and for the holding inviolable the rights of all Indian tribes until such time as they shall be extinguished (replaced) by treaty.

Section 28
Declares the Fugitive Slave Law of 1850 to be in full force in the Territory.

Section 31
Locates the seat of government of the Territory, temporarily at Fort Leavenworth, and authorizes the use for public purposes of the governmentbuildings.

Section 37
Declares all treaties, laws and other engagements made by the United States Government, with the Indian tribes inhabiting the Territory, to remain inviolate, notwithstanding anything contained in the provisions of this act. 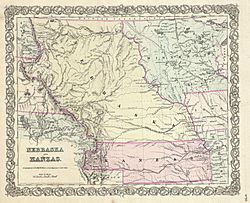 1855 first edition of Colton's map of Nebraska and Kansas Territories

Within a few days after the passage of the Kansas–Nebraska Act, hundreds of Missourians (also called Border Ruffians) crossed into Kansas territory. Many selected a section of land and voted in a meeting or meetings. This was intending to appear there was a pro-slavery majority in this region. In fact, each side became a majority back and forth.

As early as June 10, 1854, the Missourians held a meeting at Salt Creek Valley, a trading post 3 miles (5 km) west from Fort Leavenworth, at which a "Squatter's Claim Association" was organized. In newspaper articles they said they were in favor of making Kansas a slave state "if it should require half the citizens of Missouri, musket in hand, to emigrate there, and even sacrifice their lives in accomplishing so desirable an end." In another paper they warned: "The abolitionists will probably not be interrupted if they settle north of the fortieth parallel of north latitude, but south of that line, and within Kansas Territory they need not set foot. It is decreed by the people who live adjacent that their institutions are to be established, and candor compels us to advise accordingly."

During the long debate before the passage of the Kansas-Nebraska Act, planning had already started for emigrants from the free states to settle in the territory. The largest organization created for this purpose was the New England Emigrant Aid Company, organized by Eli Thayer. Emigration from the free states, including New England, Iowa, Ohio, and other Midwestern states, flowed into the territory beginning in 1854. These emigrants were known as Free-Staters. Because Missourians had claimed much of the land closest to the border, the Free-Staters were forced to establish settlements further into Kansas Territory. Among these were Lawrence, Topeka, and Manhattan.

Abolitionists, like Free-Staters, did not want Kansas to become a slave state. They wanted to get rid of slavery permanently in the United States. Abolitionists also believed “all men are created equal.” Unlike Free-Staters, they wanted equal rights for blacks. The official Free-State line supported the idea of excluding all Black people from the state of Kansas. While they didn't have slaves themselves most were prejudiced against black people believing the popular idea they were inferior. Most of the settlers seemed to want free soil for white people only. Eventually they compromised with Free-Staters to prevent slavery in Kansas.

The first territorial appointments were made in June and July 1854. The officers appointed by President Franklin Pierce. They were confirmed by the United States Senate. The first governor was Democrat Andrew Horatio Reeder. Reeder was completely in sympathy with the pro-slavery southerners. He took the oath of office in Washington, DC on July 7, 1854. He arrived in Kansas on October 7, the same year. Reeder became one of the most active land speculators in the territory. In 1855, this conflict of interest finally got him fired as governor by President Pierce.

On March 30, 1855 "Border Ruffians" from Missouri entered Kansas during the territory's first legislative election and voted in a pro-slavery Territorial Legislature. This was called the "Bogus Legislature" because of the widespread claims of election fraud. Antislavery candidates prevailed in one election district, the future Riley County.

The first session of the legislature was held in Pawnee, Kansas (within the boundary of modern-day Fort Riley) at the request of Governor Reeder. He chose it for several reasons, not the least of which was he was an investor in the city. The two-story stone building still stands and is open to the public as the first Territorial Capitol of Kansas. The building remained as the seat of the legislature for five days from July 2–6, 1855, then moved nearer Missouri to the Shawnee Methodist Mission.

The last legislative act of the Territorial Legislature was the approval of the charter for the College of the Sisters of Bethany. This was February 2, 1861—four days after James Buchanan signed the act of Congress that officially brought Kansas into the Union.

James H. Lane joined the Free-State movement in 1855 and became president the Topeka Constitutional Convention from October 23 to November 11, 1855. He was later a leader of "Jayhawkers". The first Free-state mass-meeting was in Lawrence on the evening of June 8, 1855. Missourians were charged with voter fraud, ballot-box stuffing, and the "Bogus Legislature" which does not represent the legal voters of this Territory.

It was claimed that some Missourians had used violence toward the persons and property of the inhabitants of the Kansas Territory. It was agreed that Kansas should be a free State. Also that Missourians in the late Kansas election were a gross outrage on the elective franchise and rights of freemen. They were also charged with violating popular sovereignty. Those attending did not feel bound to obey any laws made by the illegitimate legislature.

All content from Kiddle encyclopedia articles (including the article images and facts) can be freely used under Attribution-ShareAlike license, unless stated otherwise. Cite this article:
Kansas Territory Facts for Kids. Kiddle Encyclopedia.