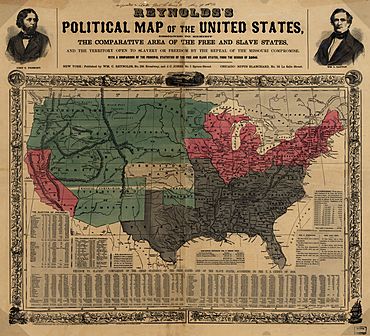 This 1856 map shows states allowing slavery (in gray), states with no slavery (in pink), U.S. territories (green), and Kansas in center (white)

The Kansas–Nebraska Act of 1854 created the territories of Kansas and Nebraska and was drafted by Democratic Senator Stephen A. Douglas of Illinois and President Franklin Pierce. The initial purpose of the Kansas–Nebraska Act was to open up thousands of new farms and make feasible a Midwestern Transcontinental Railroad.

It also allowed the states to vote on whether slavery was legal or not. This law cancelled the Missouri Compromise, which said that slavery was not legal in those areas. The Act was a key step on the way to the American Civil War.

The availability of tens of millions of acres of fertile farmland in the area made it necessary to create a territorial infrastructure to allow settlement. Railroad interests were especially eager to start operations since they needed farmers as customers. Four previous attempts to pass legislation had failed. The solution was a bill proposed in January 1854 by Douglas — the Democratic Party leader in the US Senate, the chairman of the Committee on Territories, an avid promoter of railroads, an aspirant to the presidency, and a strong believer in popular sovereignty — the policy of letting the voters, almost exclusively white males, of a territory decide whether or not slavery should exist in it. 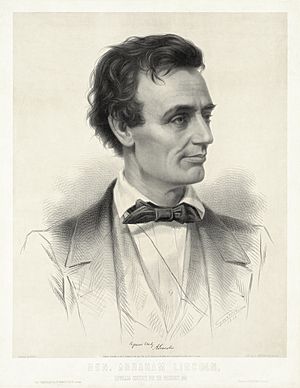 The Kansas–Nebraska Act divided the nation and pointed it toward civil war. The Act itself virtually cancelled out the Missouri Compromise of 1820. The turmoil over the act split both the Democratic and Whig parties and gave rise to the Republican Party, which split the United States into two major political camps, the Republican North and the Democratic South.

Senator Stephen A. Douglas and former Illinois Representative Abraham Lincoln aired their disagreement over the Kansas–Nebraska Act in seven public speeches during September and October 1854. Lincoln gave his most comprehensive argument against slavery and the provisions of the act in Peoria, Illinois, on October 16, the Peoria Speech.

A new anti-slavery state constitution, known as the Wyandotte Constitution, was eventually drawn up. On January 29, 1861, five weeks before Lincoln's inauguration, Kansas was admitted to the Union as a free state. On March 1, 1867, Nebraska was admitted to the Union. By then, the 1861–1865 Civil War had been fought, and slavery itself had been outlawed throughout the United States by the Thirteenth Amendment to the Constitution.

All content from Kiddle encyclopedia articles (including the article images and facts) can be freely used under Attribution-ShareAlike license, unless stated otherwise. Cite this article:
Kansas–Nebraska Act Facts for Kids. Kiddle Encyclopedia.