Compromise of 1850 facts for kids 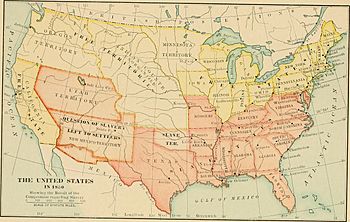 The Compromise of 1850 was a series of laws passed in 1850 that dealt with the controversial issue of slavery in the United States. As a result of the Mexican–American War, the United States acquired a great deal of new territory. The laws admitted California as a free state, and created the new territories of New Mexico and Utah. A dispute over the boundary between Texas and New Mexico was settled with Texas losing the New Mexico territory. It put an end to the slave trade in Washington, D.C. and made it easier for Southern slaveowners to recover runaway slaves. The compromise called for each new state to decide for itself whether it would be a slave or free state. This was called popular sovereignty, a term coined by Stephen A. Douglas in 1854 and later used in the Kansas–Nebraska Act.

The Missouri Compromise, passed in 1820, was an agreement between the pro-slavery and anti-slavery factions in the United States Congress. It concerned the regulation of slavery in the western territories. It admitted Missouri as a slave state to please the South. It admitted Maine as a free state to please the North. It kept the balance of power in the United States Senate between the free states and slave states. The plan also called for slavery to be banned from the Louisiana Territory north of the parallel 36 degrees 30' north (also known as the Missouri Compromise Line), except within the boundaries of the proposed state of Missouri. It was a temporary measure that reduced the conflict over slavery. But there was continued resentment between North and South. The South resented Congress interfering with slavery. The North resented having to compromise on the moral issues of slavery. Both sides wanted the political power necessary for their issue to win. In his book Negro President: Jefferson and the Slave Power, historian Garry Wills wrote, “the South was not demanding slave representation to achieve a near-parity at the moment, but as a way of achieving majority control in the immediately foreseeable future.”

In 1849, when Zachary Taylor became president, the new territories the U.S. gained after the Mexican-American war caused the issue of slavery to become critical again. The California Gold Rush had caused the population there to suddenly increase and Californians now wanted statehood as a free state. This upset the balance of 15 free states and 15 slave states established by the Missouri Compromise.

Senator Henry Clay of Kentucky presented resolutions on January 29, 1850 saying they represented the spirit of compromise that would keep the Union together. Former Vice President and Senator from South Carolina John C. Calhoun saw it differently. For a month he worked on a speech but was too ill to deliver it. Virginia Senator James A. Mason read it on the floor of the Senate on March 4. In a speech on March 7, Senator Daniel Webster of Massachusetts spoke in favor of compromise. Abolitionists in the North saw this as a betrayal and giving in to slavery interests. William H. Seward, then the Senator from New York, spoke next for the abolitionists. He claimed there was a "higher law than the Constitution," which prevented any compromise with slavery.

At the same time the House of Representatives was also debating the question. No agreements had been reached by early April so a committee was suggested by Senator Henry S. Foote of Mississippi. Called the "Committee of Thirteen" it was made up of seven Whigs and six Democrats. The committee drafted a bill based mainly on Clay's compromise resolutions made in January. Clay himself was the chairman and presented the bill on May 8.

Each side got some benefits from the compromise:

All content from Kiddle encyclopedia articles (including the article images and facts) can be freely used under Attribution-ShareAlike license, unless stated otherwise. Cite this article:
Compromise of 1850 Facts for Kids. Kiddle Encyclopedia.