John Calhoun was the son of Scots-Irish immigrant Patrick Calhoun. When his father became ill, the 14-year-old boy quit school to manage the family farm in South Carolina. But he eventually returned to his studies, earning a degree from Yale College in 1804. He was admitted to the South Carolina bar in 1807.

On January 8, 1811, he married Floride Bonneau Colhoun. The couple had ten children over an 18-year period. During her husband's second term as Vice President, Mrs. Calhoun was a central figure in the Petticoat Affair.

In 1810, Calhoun was elected to Congress, and became one of the War Hawks who, led by Henry Clay, agitated for what became the War of 1812. After the war, he proposed a Bonus Bill for public works. In 1817, President James Monroe appointed Calhoun to be Secretary of War. 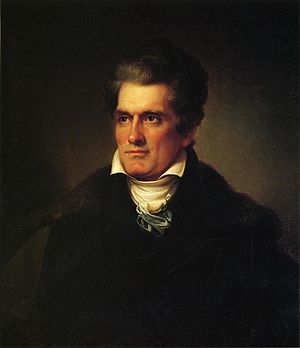 A portrait of Calhoun from 1834

In the election of 1824, no candidate received a majority in the Electoral College; the election was ultimately resolved by the House of Representatives. Calhoun forged an alliance between factions that made John Quincy Adams President and Calhoun Vice President. But he would soon break with Adams, whom he believed unfairly favored Northern interests.

Calhoun became Andrew Jackson's running mate in the election of 1828, and again became Vice President. But once again a rift between Northern and Southern views drove a wedge between Calhoun and his president.

On December 28, 1832, Calhoun accepted election to the United States Senate from his native South Carolina, becoming the first Vice President to resign from office in U.S. history. He would achieve his greatest influence and most lasting fame as a senator.

Calhoun led the pro-slavery faction in the Senate in the 1830s and 1840s, opposing both abolitionism and attempts to limit the expansion of slavery into the western territories. He was also a major advocate of the Fugitive Slave Law, which enforced the co-operation of Free States in returning escaping slaves.

Calhoun's fierce defense of slavery and support for the Slave Power played a major role in deepening the growing divide between the Northern and Southern states on this issue, wielding the threat of Southern secession to back slave-state demands. 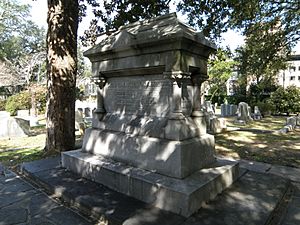 After a one year break as Secretary of State, Calhoun returned to the Senate in 1845, participating in the epic Senate struggle over the expansion of slavery in the Western states that produced the Compromise of 1850. But his health deteriorated and he died on March 31, 1850, of tuberculosis in Washington, DC, at the age of 68, and was buried in St. Phillips Churchyard in Charleston, South Carolina.

Calhoun received many honors by subsequent generations after his death, but his legacy as one of the leading defenders of slavery in American history has also rendered him a highly controversial figure.

During the Civil War, the Confederate government honored Calhoun on a one-cent postage stamp, which was printed but never officially released. 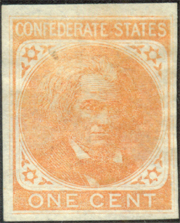 Calhoun was also honored by his alma mater, Yale University, which named one of its undergraduate residence halls "Calhoun College." (In recent years some students have called for the residence hall to be renamed, either by dropping the name of the slavery defender entirely or by hyphenating Calhoun's name with the name of a civil rights leader. Their efforts have not been successful, but the issue flares periodically.) The university also erected a statue of Calhoun in Harkness Tower, a prominent campus landmark.

Clemson University is also part of Calhoun's legacy. The campus sits on Calhoun's Fort Hill plantation, which he bequeathed to his son-in-law, Thomas Green Clemson.

Clemson's chief claim to fame, prior to founding the university in his will, was having served as ambassador to Belgium, a post he obtained through the influence of his father-in-law, who was Secretary of State at the time. In 1888, after Calhoun's daughter had died, Clemson wrote a will bequeathing his father-in-law's former estate to South Carolina on the condition that it be used for an agricultural university to be named "Clemson." A nearby town named for Calhoun was renamed "Clemson" in the 1930s.

Calhoun is also the namesake for Calhoun Community College in Decatur, Alabama.

In 1957, United States Senators honored Calhoun as one of the "five greatest senators of all time." A 2000 Senate resolution named him one of the "seven greatest" of all time.

All content from Kiddle encyclopedia articles (including the article images and facts) can be freely used under Attribution-ShareAlike license, unless stated otherwise. Cite this article:
John C. Calhoun Facts for Kids. Kiddle Encyclopedia.