Abbeville is a city in Abbeville County, South Carolina, United States, 86 miles (138 km) west of Columbia and 45 miles (72 km) south of Greenville. Its population was 5,237 at the 2010 census. It is the county seat of Abbeville County. Settled by French Huguenot settlers, it was named, along with the county, for the French town of the same name.

Abbeville was established by French Huguenots in 1764, at a site named by John de la Howe. It was incorporated in 1840.

Ardernt defender of slavery and Vice President of the United States John C. Calhoun first practiced law in Abbeville, and he was born on a farm on the outskirts in what is now Mt. Carmel.

Abbeville and the American Civil War 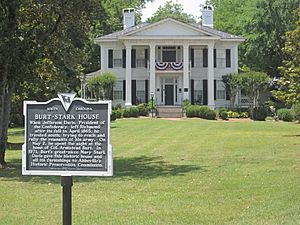 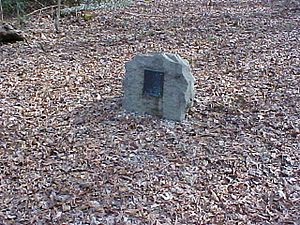 The Rock at Secession Hill

Abbeville has the unique distinction of being both the birthplace and the deathbed of the Confederacy. On November 22, 1860, a meeting was held at Abbeville, at a site since dubbed "Secession Hill", to launch South Carolina's secession from the Union; one month later, the state of South Carolina became the first state to secede.

At the end of the Civil War, with the Confederacy in shambles, Confederate President Jefferson Davis fled Richmond, Virginia, and headed south, stopping for a night in Abbeville at the home of his friend Armistead Burt. It was on May 2, 1865, in the front parlor of what is now known as the Burt-Stark Mansion that Jefferson Davis officially acknowledged the dissolution of the Confederate government, in the last official cabinet meeting.

Following an altercation with a shopkeeper, farmer Anthony Crawford was attacked by a mob and killed on October 21, 1916. Crawford owned over 400 acres and was without doubt one of the richest men in Abbeville County. Subsequently, town dwellers voted to expel surviving members of the Crawford family and shut all black-owned businesses. They also voted to close down all the black-owned businesses in Abbeville. A memorial to Crawford was erected in 2005.

In 2011, Abbeville High School won its sixth South Carolina high school football state championship. It was the second title in a row in the 1A division.

Abbeville is the location of the tallest building in South Carolina, the Prysmian Copper Wire Tower. Built in 2009, the tower is 373 feet (114 m) tall and has 30 floors.

Nearby is the Sumter National Forest.

Abbeville has a humid subtropical climate (Köppen Cfa). Winters are cool, sometimes cold, and short in duration. Summers are hot and humid. The transitional seasons of spring and fall can vary in temperature but tend to be warm. In the summer highs usually peak in the mid 90s, but temperatures over 100 °F (37.8 °C) occur on occasion, most recently in the summer of 2012 during a heat wave. That year, the all-time record high of 109 °F (42.8 °C) was recorded on July 1. In the winter highs are in the low to mid 50s and lows are right around freezing, seldom dropping below 25 °F (−3.9 °C). Precipitation is well distributed throughout the year. Afternoon thunderstorms are a common occurrence in the summer months and can bring heavy winds and lightning. Snow is rare, falling every few years. On March 31, 1973, an F4 tornado struck Abbeville and killed 7 people, making it the deadliest single tornado in 1973. The area was struck by two tornadoes on April 10, 2009. No fatalities were recorded, but the majority of the city lost power and many buildings sustained significant damage.

There were 2,396 households out of which 30.7% had children under the age of 18 living with them, 37.1% were married couples living together, 23.9% had a female householder with no husband present, and 34.3% were non-families. 30.6% of all households were made up of individuals and 13.9% had someone living alone who was 65 years of age or older. The average household size was 2.39 and the average family size was 2.97.

Abbeville is the center of a small urban cluster with a total population of 6,038 (2000 census).

All content from Kiddle encyclopedia articles (including the article images and facts) can be freely used under Attribution-ShareAlike license, unless stated otherwise. Cite this article:
Abbeville, South Carolina Facts for Kids. Kiddle Encyclopedia.