Greenville ( locally) is the county seat of Greenville County in the upstate region of South Carolina, in the United States. The city's mayor is Knox White, who has served in that position since December 1995. With an estimated population of 64,579 as of 2015, it is the sixth-largest city in the state. The population of the surrounding area was 400,492 as of 2010, making it the third-largest urban area in South Carolina as well as the fastest growing. Greenville is the largest city in the Greenville-Anderson-Mauldin Metropolitan Statistical Area. The MSA had a population of 874,869 in 2015, making it the largest in South Carolina and the third largest in the Carolinas.

Greenville is the largest city in the Greenville-Spartanburg-Anderson Combined Statistical Area. According to United States Census Bureau, the CSA had a population of 1,426,625 as of 2015, making it the largest CSA in the state. The CSA, a 10-county region of northwestern South Carolina, is known as "The Upstate". Greenville is located approximately halfway between Atlanta and Charlotte, North Carolina, along Interstate 85, and its metropolitan area also includes Interstates 185 and 385.

From Cherokee Land to Greenville County 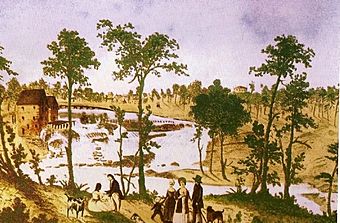 The land of present-day Greenville was once the hunting ground of the Cherokee which was forbidden to colonists. A wealthy settler from Virginia named Richard Pearis arrived in South Carolina around 1754 trading with Cherokee. Pearis had a child with a Cherokee woman and received about 100,000 acres (40,000 ha) from the Cherokee around 1770. Pearis established a plantation on the Reedy River called the Great Plains in present-day downtown Greenville. The American Revolution divided the South Carolina country between the Loyalists and Patriots. Pearis supported the Loyalists and together with their allies the Cherokee attacked the Patriots. The Patriots retaliated by burning down Pearis' plantation and jailing him in Charleston. Pearis never returned to his plantation but Paris Mountain is named after him. The Treaty of Dewitt's Corner in 1777 ceded almost all Cherokee land, including present-day Greenville, to South Carolina.

Greenville County was created in 1786 and was named for its physical appearance. However, other sources say Greenville is named after General Nathanael Greene in honor of his service in the American Revolutionary War. Lemuel J. Alston came to Greenville County in 1788 and bought 400 acres (160 ha) and a portion of Pearis' former plantation. In 1797 Alston used his land holdings to establish a village called Pleasantburg where he also built a stately mansion. Vardry McBee purchased Alston's land in 1816 who then leased the Alston mansion for a summer resort. McBee decided to make the mansion his home in 1835 until his death in 1864. Considered to be the father of Greenville, McBee donated land for many structures such as churches, academies and a cotton mill. Furman University was funded by McBee who helped bring the university to Pleasantburg from Winnsboro, South Carolina in 1851. In 1853 McBee and other Greenville County leaders funded a new railroad called the Greenville and Columbia Railroad. Pleasantburg boomed to around 1,000 in the 1850s due to the growth of McBee's donations and the attraction of the town as a summer resort for visitors. In 1831 Pleasantburg was incorporated as Greenville. 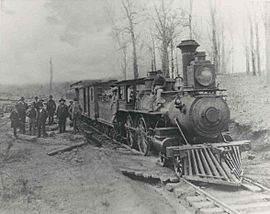 The Greenville and Northern Railway in the 1890s which was converted into the Swamp Rabbit Trail in 2010.

In December 1860 Greenville supported a convention to debate the issue of secession for South Carolina. The Greenville District sent James Furman, William K. Easley, Perry E. Duncan, William H. Campbell, and James P. Harrison as delegates for the convention. On December 20, 1860 the South Carolina state convention, along with the Greenville delegation, voted to secede from the Union. Greenville County provided over 2,000 soldiers to the Confederate States Army. The town supplied food, clothing, and firearms to the Confederacy. Greenville saw no action from the war until 1865 when Union troops came through the town looking for President Jefferson Davis of the Confederacy who had fled south from Richmond, Virginia. In June 1865 Andrew Johnson appointed Greenville County native Benjamin Franklin Perry as Governor of South Carolina.

In February 1869, Greenville's town charter was amended by the S. C. General Assembly establishing Greenville, the town, as a city. Construction boomed in the 1870s such as the establishment of a bridge over the Reedy River, new mills on the river and new railroads. The Greenville News was established in 1874 as Greenville's first daily newspaper. Southern Bell installed the first telephone lines in the city. The most important infrastructure that came to the city were cotton mills. Prominent cotton mill businesses operated near Greenville making it a cotton mill town. By 1915 Greenville became known as the "Textile Center of the South." 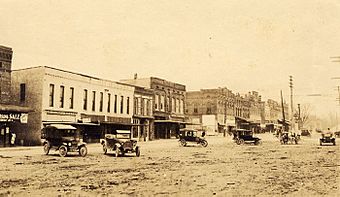 During World War I, Greenville served as a training camp center for Army recruits. After World War I commercial activity expanded with new movie theaters and department stores. The Mansion House was demolished and replaced with the Poinsett Hotel in 1925. The Great Depression hurt the economy of Greenville forcing mills to lay off workers. Furman University and the Greenville Women's College also struggled in the crippling economy forcing them to merge in 1933. The Textile Workers Strike of 1934 caused such an uproar in the city and surrounding mill towns that the National Guard had to subdue the chaos. The New Deal established Sirrine Stadium and a new Greenville High School. The Greenville Army Air Base was established in 1942 during World War II contributing to the further growth of Greenville.

After World War II Greenville's economy surged with the establishment of new downtown stores and the expansion of the city limits. Furman University doubled its student population and moved to a new location. Higher education facilities such as Bob Jones University in 1947 and Greenville Technical College in 1962 were established in Greenville. The Greenville–Spartanburg International Airport was established in nearby Greer in 1962. The economy of Greenville finally waned in the 1970s leaving a void in downtown Greenville due to the flight of many retailers. Mayor Max Heller revitalized downtown Greenville by establishing the Greenville County Museum of Art and the Hughes Main Library. Main Street was then converted into a two-lane road lined with trees and sidewalks. 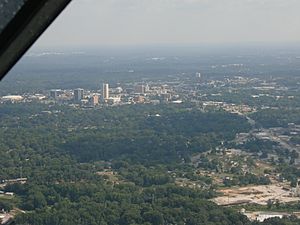 Downtown Greenville from the air

Greenville is in the foothills of the Blue Ridge Mountains, a physiographic province of the larger Appalachian Mountains range, and includes many small hills. Sassafras Mountain, the highest point in South Carolina, is in northern Pickens County, less than 40 miles (64 km) northwest of Greenville. Many area television and radio station towers are on Paris Mountain, the second most prominent peak in the area, 8 miles (13 km) north of downtown Greenville. According to the United States Census Bureau, Greenville has a total area of 28.8 square miles (74.6 km2), of which 28.7 square miles (74.3 km2) are land and 0.2 square miles (0.4 km2), or 0.51%, are water. The Reedy River, a tributary of the Saluda River, runs through the center of the city.

Greenville is located in the Brevard Fault Zone and has had occasional earthquakes, though they are minor.

Greenville, like much of the Piedmont region of the southeastern United States, has a humid subtropical climate (Köppen Cfa), with four distinct seasons; the city is part of USDA Hardiness zone 7b/8a. Winters are short and generally cool, with a January daily average of 42.2 °F (5.7 °C). On average, there are 59 nights per year that drop to or below freezing, and only 1.3 days that fail to rise above freezing. April is the driest month, with an average of 3.36 inches (85 mm) of precipitation.

Precipitation is generally less frequent in autumn than spring and, on average, Greenville receives 47.2 inches (1,200 mm) of precipitation annually, which is somewhat evenly distributed throughout the year, although summer is slightly wetter; annual precipitation has historically ranged from 31.08 in (789 mm) in 2007 to 72.53 in (1,842 mm) in 1908. In addition, there is an average of 4.7 inches (11.9 cm) of snow, occurring mainly from January thru March, with rare snow occurring in November or April. More frequent ice storms and sleet mixed in with rain occur in the Greenville area; seasonal snowfall has historically ranged from trace amounts as recently as 2011–12 to 21.4 in (54 cm) in 1935–36. These storms can have a major impact on the area, as they often pull tree limbs down on power lines and make driving hazardous. 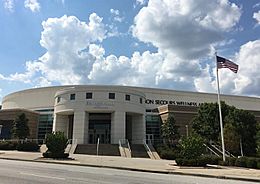 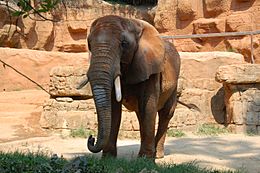 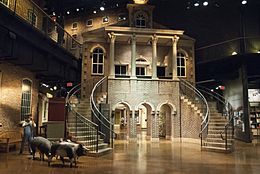 Greenville has been named one of the "Top 100 Arts Small Towns in the United States." The Bon Secours Wellness Arena brings national tours of many popular bands to downtown, and the Peace Center for the Performing Arts provides a venue for orchestras and plays. A planned multimillion-dollar renovation to the center's main concert hall lobby and riverside amphitheatre began in the spring of 2011. 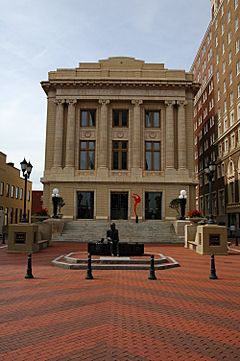 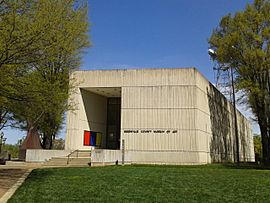 A number of local artists operate studios and galleries in the city, especially the Village of West Greenville near downtown. The Metropolitan Arts Council and Upstate Visual Arts provide a number of public events that focus on the visual arts, including the First Fridays Art Walk, Greenville Open Studios, and the West Greenville Arts Festival. Greenville also provides some notable fine arts museums:

Lynyrd Skynyrd played their last concert with all original members in Greenville, on October 19, 1977.

Greenville is also the home of the Greenville Chorale, a 160-voice choral group.

Formed in 1993 by Greenville native Karl Sanders, ancient Egyptian-themed technical death metal band Nile is based in the city.

There are eight comedy venues in Greenville featuring stand up comedy, sketch comedy, ventriloquists, as well as experimental and non-traditional comedy.

The Carolina Ballet Theatre is a professional dance company which regularly presents programs at the Peace Center and elsewhere. CBT presents four performances annually as the resident professional dance company of the Peace Center with their largest as the holiday classic, "The Nutcracker, Once Upon A Time in Greenville." This production is modelled after the major companies who have set their holiday class in their hometown. Centre Stage, Greenville Little Theater, South Carolina Children's Theater and the Warehouse Theatre are the major playhouses in the area. These theaters offer a variety of performances including well-known works, such as Death of a Salesman and Grease, and plays written by local playwrights. During the Spring and Summer, the local Shakespearean company performs Shakespeare in the Park at the Falls Park Amphitheater.

Upstate Swing has been putting on a weekly Tuesday swing dance since 1998, drawing hundreds of people every week to a beginner lesson, followed by a three-hour social dance.

The Greenville Lindy Hoppers meet weekly on Thursdays for beginner and intermediate Lindy Hop lessons, followed by a social dance. They also host The Greenville Lindy Exchange the last weekend of June every year, which draws hundreds of swing dancers from across the southeast to the Upstate.

The Harvest Moon Folk Society meets weekly to host a Contra dance at the River Falls Lodge and hosts Contra events in the downtown Greenville area.

Greenville is the largest principal city of the Greenville-Anderson-Mauldin Metropolitan Statistical Area, a metropolitan area that covers Greenville, Laurens, Anderson and Pickens counties and had a combined population of 874,869 as of 2015.

Since South Carolina law makes annexing the suburban areas around cities difficult, Greenville's population is larger than what it is said to be. The 2010 city population was 58,409, while the total area population was 400,492.

Neighborhoods within the city of Greenville include:

All content from Kiddle encyclopedia articles (including the article images and facts) can be freely used under Attribution-ShareAlike license, unless stated otherwise. Cite this article:
Greenville, South Carolina Facts for Kids. Kiddle Encyclopedia.