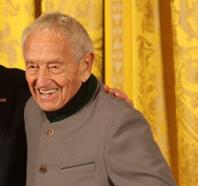 Andrew Newell Wyeth ( WY-eth; July 12, 1917 – January 16, 2009) was an American visual artist, primarily a realist painter, working mostly in a regionalist style. He was one of the best-known U.S. artists of the middle 20th century.

Wyeth was born in Chadds Ford, Pennsylvania. He was the youngest of N.C. Wyeth's five children. His siblings included artists Henriette Wyeth and Carolyn Wyeth as well as inventor Nathaniel Wyeth. In 1940, he married Betsy James, who would often model in his paintings.

All content from Kiddle encyclopedia articles (including the article images and facts) can be freely used under Attribution-ShareAlike license, unless stated otherwise. Cite this article:
Andrew Wyeth Facts for Kids. Kiddle Encyclopedia.