American Academy of Arts and Letters facts for kids 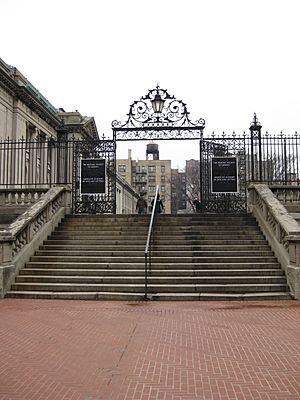 Audubon Terrace, the campus that the academy shares

The American Academy of Arts and Letters is a 250-member honor society. Its goal is to support excellence in American literature, music, and art. It is in the Washington Heights neighborhood of Manhattan in New York City. It is in Audubon Terrace on Broadway between West 155th and 156th Streets, with the Hispanic Society of America and Boricua College.

The academy's galleries are open to the public. Exhibits include paintings, sculptures, photographs and works on paper from contemporary artists chosen by its members. Also works by newly elected members and award winners are shown. A permanent exhibit of the recreated studio of composer Charles Ives was opened in 2014.

Musicians and engineers like to record live there because the acoustics are among the city's finest. Hundreds of commercial recordings have been made there.

Members are chosen for life. They have been some of the leading people in American art. Members are in committees that give annual prizes to help new artists.

Women were not elected to membership in the early years. In 1908, poet Julia Ward Howe was elected to the AAA, becoming the first female member.

All content from Kiddle encyclopedia articles (including the article images and facts) can be freely used under Attribution-ShareAlike license, unless stated otherwise. Cite this article:
American Academy of Arts and Letters Facts for Kids. Kiddle Encyclopedia.