Joseph John Campbell (March 26, 1904 – October 30, 1987) was an American mythologist, writer, and lecturer best known for his work in the fields of comparative mythology and comparative religion. His work is vast and covers many aspects of the human experience, and his philosophy is often identified with the phrase he coined: "Follow Your Bliss". 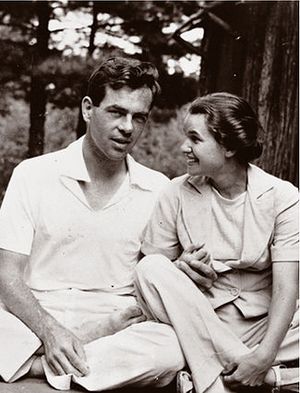 Joseph Campbell was born and raised in White Plains, New York in an upper middle class Roman Catholic family. As a child, Campbell became fascinated with Native American culture after his father took him to see the American Museum of Natural History in New York where he saw on display featured collections of Native American artifacts. He soon became educated in numerous aspects of Native American society, primarily in Native American mythology. This led to Campbell's lifelong passion for myth and to his study of the mythology that appeared to exist among human cultures.

He graduated from the Canterbury School (Connecticut) in 1921. While at Dartmouth College he studied biology and mathematics, but decided that he preferred the humanities. He transferred to Columbia University where he received his B.A. in English literature in 1925 and M.A. in Medieval literature in 1927. Campbell was also an accomplished athlete, receiving awards in track and field events.

Joseph Campbell died at the age of 83 on October 30, 1987, at his home in Honolulu, Hawaii, from complications due to esophageal cancer shortly after completing filming of The Power of Myth with Bill Moyers.

George Lucas was the first Hollywood filmmaker to openly credit Campbell's influence. Lucas stated following the release of the first Star Wars film in 1977 that its story was shaped, in part, by ideas described in The Hero With a Thousand Faces and other works of Campbell's. The linkage between Star Wars and Campbell was further reinforced when later reprints of Campbell's book used the image of Mark Hamill as Luke Skywalker on the cover. It was not until after the completion of the original Star Wars trilogy in 1983, however, that Lucas met Campbell or heard any of his lectures.

All content from Kiddle encyclopedia articles (including the article images and facts) can be freely used under Attribution-ShareAlike license, unless stated otherwise. Cite this article:
Joseph Campbell Facts for Kids. Kiddle Encyclopedia.