Sir James George Frazer OM FRS FRSE FBA ( 1 January 1854 – 7 May 1941) was a Scottish social anthropologist and folklorist influential in the early stages of the modern studies of mythology and comparative religion. His most famous work, The Golden Bough (1890), documents and details the similarities among magical and religious beliefs around the globe. Frazer posited that human belief progressed through three stages: primitive magic, replaced by religion, in turn replaced by science.

He was born on 1 January 1854 in Glasgow, Scotland, the son of Daniel F. Frazer, a chemist, and his wife, Katherine Brown.

Frazer attended school at Springfield Academy and Larchfield Academy in Helensburgh. He studied at the University of Glasgow and Trinity College, Cambridge, where he graduated with honours in classics (his dissertation was published years later as The Growth of Plato's Ideal Theory) and remained a Classics Fellow all his life. From Trinity, he went on to study law at the Middle Temple, but never practised.

Four times elected to Trinity's Title Alpha Fellowship, he was associated with the college for most of his life, except for a year, 1907–1908, spent at the University of Liverpool. He was knighted in 1914, and a public lectureship in social anthropology at the universities of Cambridge, Oxford, Glasgow and Liverpool was established in his honour in 1921. He was, if not blind, then severely visually impaired from 1930 on. He and his wife, Lilly, died in Cambridge, England, within a few hours of each other. He died on 7 May 1941. They are buried at the Ascension Parish Burial Ground in Cambridge.

Frazer is commonly interpreted as an atheist in light of his criticism of Christianity and especially Roman Catholicism in The Golden Bough. However, his later writings and unpublished materials suggest an ambivalent relationship with Neoplatonism and Hermeticism.

In 1896 Frazer married Elizabeth Grove, a writer whose family was from Alsace. She would later adapt Frazer's Golden Bough as a book of children's stories, The Leaves from the Golden Bough.

The study of myth and religion became his areas of expertise.

Theories of Religion and Cultural Evolution

Frazer believed that magic and science were similar because both shared an emphasis on experimentation and practicality; indeed, his emphasis on this relationship is so broad that almost any disproven scientific hypothesis technically constitutes magic under his system. In contrast to both magic and science, Frazer defined religion in terms of belief in personal, supernatural forces and attempts to appease them.

Frazer collected stories from throughout the British Empire and devised four general classifications into which many of them could be grouped:

The Story of the Two Messengers

This type of story is common in Africa. Two messages are carried from the supreme being to mankind: one of eternal life and one of death. The messenger carrying the tidings of eternal life is delayed, and so the message of death is received first by mankind.

Because of this, Bantu people, such as the Ngoni, punish lizards and chameleons. For example, children may be allowed to put tobacco into a chameleon's mouth so that the nicotine poisons it and the creature dies, writhing while turning colours.

Variations of the tale are found in other parts of Africa.

The Story of the Waxing and Waning Moon 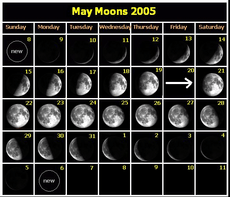 The phases of the moon

The moon regularly seems to disappear and then return. This gave primitive peoples the idea that man should or might return from death in a similar way. Stories that associate the moon with the origin of death are found especially around the Pacific region. In Fiji, it is said that the moon suggested that mankind should return as he did. But the rat god, Ra Kalavo, would not permit this, insisting that men should die like rats. In Australia, the Wotjobaluk aborigines say that the moon used to revive the dead until an old man said that this should stop. The Cham have it that the goddess of good luck used to revive the dead, but the sky-god sent her to the moon so she could not do this any more.

The Story of the Serpent and His Cast Skin 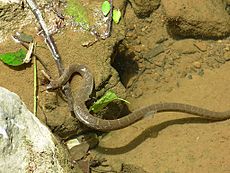 A snake shedding its skin

Animals which shed their skin, such as snakes and lizards, appeared to be immortal to primitive people. This led to stories in which mankind lost the ability to do this. For example, in Vietnam, it was said that the Jade Emperor sent word from heaven to mankind that, when they became old, they should shed their skins while the serpents would die and be buried. But some snakes overheard the command and threatened to bite the messenger unless he switched the message, so that man would die while snakes would be eternally renewed. For the natives of the island of Nias, the story was that the messenger who completed their creation failed to fast and ate bananas rather than crabs. If he had eaten the latter, then mankind would have shed their skins like crabs and so lived eternally.

The Story of the Banana 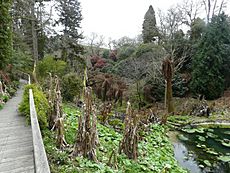 The banana plant bears its fruit on a stalk which dies after bearing. This gave people such as the Nias islanders the idea that they had inherited this short-lived property of the banana rather than the immortality of the crab. The natives of Poso also based their myth on this property of the banana. Their story is that the creator in the sky would lower gifts to mankind on a rope and, one day, a stone was offered to the first couple. They refused the gift as they did not know what to do with it and so the creator took it back and lowered a banana. The couple ate this with relish, but the creator told them that they would live as the banana, perishing after having children rather than remaining everlasting like the stone.

All content from Kiddle encyclopedia articles (including the article images and facts) can be freely used under Attribution-ShareAlike license, unless stated otherwise. Cite this article:
James George Frazer Facts for Kids. Kiddle Encyclopedia.