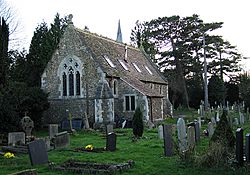 The former chapel of the Ascension Parish Burial Ground, Cambridge.

The Ascension Parish Burial Ground, formerly the burial ground for the parish of St Giles and St Peter's, is a cemetery in Cambridge, England. It includes the graves and memorials of many University of Cambridge academics and non-conformists of the 19th and early 20th century. The cemetery encapsulates a century-and-a-half of the University's modern history, with 83 people with Oxford Dictionary of National Biography biographies. Among those buried here John Couch Adams, the astronomer, is unique in also having a memorial in Westminster Abbey.

The 1.5 acres (0.61 ha) of the burial ground were established in 1857 when extra burial space was needed as the city of Cambridge expanded in Victorian times. The first burial here was in 1869. Today some 2,500 people are buried in about 1,500 plots. Many city and university dignitaries, scientists and scholars are buried here, including and 11 members of the Cambridge Apostles. 83 have biographies in the Oxford Dictionary of National Biography.

The cemetery is located just off Huntingdon Road near the junction with Storey's Way in the northwest of Cambridge. The burial ground is a designated City Wildlife Site and is part of the Storey's Way Conservation area. In 2005 the plant species present were catalogued and the site is now managed so as to encourage wildlife and habitat diversity, as well as to care for the graves themselves.

The Friends of the Parish of the Ascension Burial Ground aim to protect and enhance the burial ground for the public benefit as a place of remembrance, spirituality, history and nature.

Graves and memorials of notable individuals

Note: plot numbers, where known, are given in square brackets. 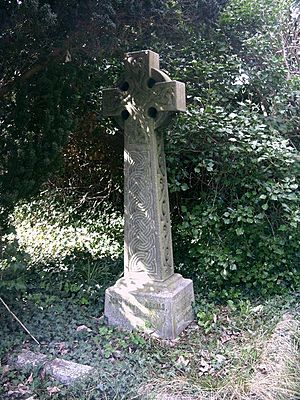 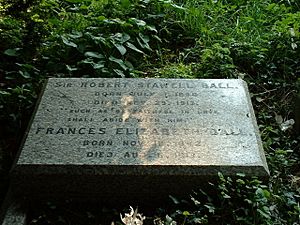 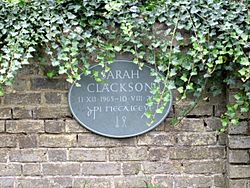 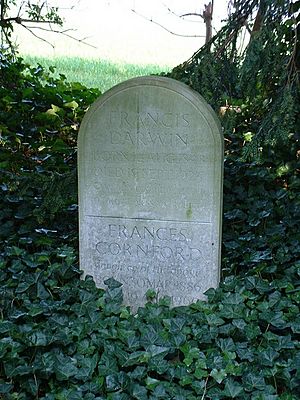 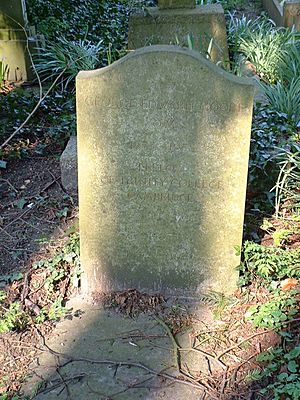 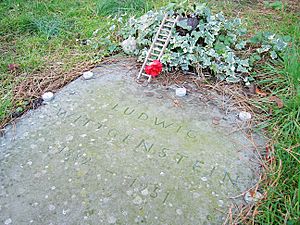 Gravestone of Ludwig Wittgenstein in 2004, before its 2015 restoration

Charles Darwin himself is buried in Westminster Abbey.

All content from Kiddle encyclopedia articles (including the article images and facts) can be freely used under Attribution-ShareAlike license, unless stated otherwise. Cite this article:
Ascension Parish Burial Ground Facts for Kids. Kiddle Encyclopedia.