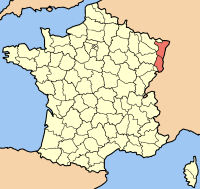 Alsace is marked in red 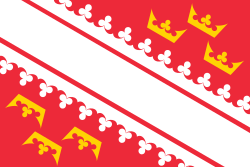 The departments in Alsace were Bas-Rhin and Haut-Rhin.

Before the region merged with Champagne-Ardenne and Lorraine in 2014, data from INSEE stated that about 1.8 million people lived there as of 2013. Its capital was Strasbourg, the largest city. It changed hands between France and Germany many times. The people living there had an attitude and set of social values that was closer to the German ones, than the French. Language, cuisine, music, dress and customs were Germanic, and very close to the Swabian ones across the Rhine. The overall culture was generally more German than French, being somewhere between German and French.

Alsace was part of the Holy Roman Empire and was still inhabited by people speaking a dialect of Upper German. In the 17th century, all of Alsace was annexed (in steps) under King Louis XIV of France. He made it one of the provinces of France.

The Treaty of Verdun had divided the empire of Charlemagne in the 9th century, eventually causing Alsace to be frequently mentioned in conjunction with Lorraine, because the possession of these two régions (as Alsace-Lorraine) was often contested in the 19th and 20th centuries.

All content from Kiddle encyclopedia articles (including the article images and facts) can be freely used under Attribution-ShareAlike license, unless stated otherwise. Cite this article:
Alsace Facts for Kids. Kiddle Encyclopedia.