Haut-Rhin is a department in the Grand Est region of France, named after the Rhine river that flows along its eastern border. Its name means Upper Rhine. The prefecture (capital) of Haut-Rhin is Colmar.

Haut-Rhin is one of the original 83 departments created during the French Revolution on 4 March 1790. It was divided in three districts: Altkirch, Belfort and Colmar, with Colmar as is capital.

The Haut-Rhin department was eliminated in 1871 when the territory became part of Germany except for a part that forms the Territoire de Belfort.

In 1919, Haut-Rhin is again an department when the territory became part of France with the arrondissements Colmar-Ville, Colmar-Campagne, Altkirch, Guebwiller, Mulhouse, Ribeauvillé and Thann. Its capital is Colmar.

Haut-Rhin is the smaller and less populated of the two departments of the former administrative Alsace region. It is in the Grand Est region and borders 3 departments in 2 regionsː

To the east, the department borders Germany along the Rhine river, and to the south it borders with Switzerland.

The area around Colmar, at an altitude of about 210 m (690 ft), is characterized by climates with few extremes of temperature. The Köppen climate classification type for the climate at Strasbourg is a "Marine West Coast Climate" and of the subtype "Cfb".

Haut-Rhin is managed by the Departmental Council of Haut-Rhin in Colmar. The department is part of the Grand Est region.

There are 4 arrondissements (districts), 17 cantons and 366 communes (municipalities) in Haut-Rhin.

The following is a list of the 17 cantons of the Haut-Rhin department (with their INSEE codes), following the French canton reorganisation which came into effect in March 2015:

The inhabitants of the Haut-Rhin department are known, in French, as Haut-Rhinois or (women: Haut-Rhinoises),

Evolution of the population in Haut-Rhin 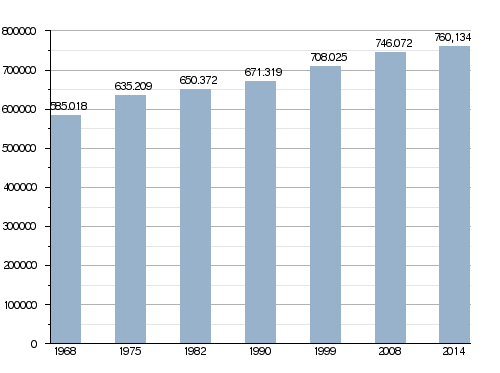 The 10 communes with more inhabitants in the Haut-Rhin department are:

All content from Kiddle encyclopedia articles (including the article images and facts) can be freely used under Attribution-ShareAlike license, unless stated otherwise. Cite this article:
Haut-Rhin Facts for Kids. Kiddle Encyclopedia.