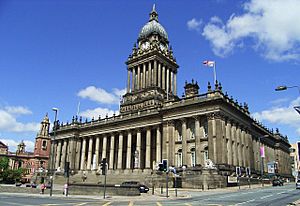 A city hall or town hall is the headquarters of a city or town's administration and usually houses the city or town council, its associated departments and their employees. It is also usually the base of the city, town, borough or county mayor.

In North America, a hall is labeled a "city" or "town" hall depending on the size of the municipality it serves. City halls are usually found in larger cities and town halls in smaller urban areas.

In the United Kingdom, Australia, New Zealand, Hong Kong and many Commonwealth countries, "town hall" is the more common term. During the 1960s many of the older town halls were replaced by "Civic centres". The civic centre was a functional building, offices of the council only, without the art gallery or hall for cultural activities which were a feature of many of the older town halls.

"County hall" is used for the headquarters of County council administrations.

All content from Kiddle encyclopedia articles (including the article images and facts) can be freely used under Attribution-ShareAlike license, unless stated otherwise. Cite this article:
City and town halls Facts for Kids. Kiddle Encyclopedia.