South Palm Beach is a town located in Palm Beach County, Florida, United States. The town is situated on a barrier island between the Atlantic Ocean and the Intracoastal Waterway. The entire town is approximately 5/8th of a mile (1 km) long along South Ocean Boulevard (Florida State Road A1A), its only street. It is between the Town of Palm Beach to the north and the Town of Lantana and its public beach to the south. As of the 2010 census, the population was 1,171. 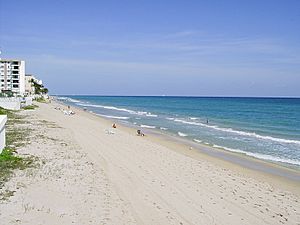 There were 453 households, out of which 2.2% had children under the age of 18 living with them, 38.6% were married couples living together, 3.5% had a female householder with no husband present, and 56.7% were non-families. 52.1% of all households were made up of individuals, and 28.5% had someone living alone who was 65 years of age or older. The average household size was 1.54 and the average family size was 2.14. 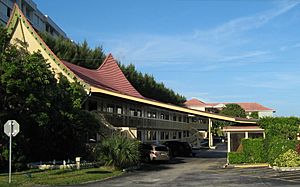 Originally built in 1964, the Polynesian inspired, 58-room Palm Beach Oceanfront Inn and its ocean-front restaurant Tides Bar and Grille, located at 3550 South Ocean Boulevard, made up the only commercial business establishment within the town of South Palm Beach. It was described as "one of the last vestiges of old Florida along A1A."

Kosova Realty bought the inn for $3.3 million in 2002 and named it as Palm Beach Oceanfront Inn. Known to locals by its former name, the Hawaiian Inn, the two-story motel lost most of its beach during Hurricane Wilma in 2005 and was not being maintained.

A proposal by the Paloka family owned-and-operated realty company to replace the inn with a luxury resort-style 12-story condominium-hotel built over two stories of parking was unanimously rejected by the South Palm Beach Town Council in October 2007. The established comprehensive plan limits new buildings to six-stories over one-level of parking.

On September 18, 2009, the Treasure Coast Regional Planning Council meeting expressed concerns about the redevelopment and recommended that the Town of Palm Beach should respond to negative opinions by its citizens prior to adoption of the amendments, as well as ensure that development approval conditions address problems with the use, height limits, and negative impacts on the beaches.

The Paloka family tried to change the town codes to allow a bigger building such as a 14-story condominium and "were willing to build the town a public safety building and new town hall to sweeten the deal." They increased business at the property during 2011 and were planning capital improvements, but foreclosure proceedings began. Kosova Realty filed for Chapter 11 bankruptcy in March 2012.

In November 2012, the operation was purchased by Paragon Acquisition Group of Boca Raton, a distressed property development company, with plans to improve and revive the facility, as well as "possibility of a development project in the future." DDG then partnered with investor Gary Cohen of Paragon on the development. According to the CEO of developer DDG, Joseph A. McMillan, Jr., in 2012 a DDG affiliate paid $8.25 million for the 1.1-acre (0.4 ha) site. Although the property has received minor renovations and is being managed as a hotel and restaurant, the long-term prospects for it are for condominiums according to the CEO of Paragon.

The current zoning for oceanfront property in the town allows 33 units per acre, while a more dense project would require a referendum. Plans by DDG were announced for 30 residential units to be built above a one-story parking garage. The old motel and restaurant on the site were demolished in April 2016. Marketing for the new 30-unit building featured amenities such as concierge service, a dog park, and private jet service. In June 2018, the building "officially topped out, reaching its full height of seven stories." September 2019 marked the completion of the building.

All content from Kiddle encyclopedia articles (including the article images and facts) can be freely used under Attribution-ShareAlike license, unless stated otherwise. Cite this article:
South Palm Beach, Florida Facts for Kids. Kiddle Encyclopedia.