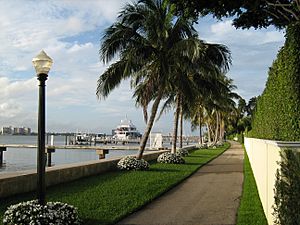 The Lake Trail along the Lake Worth Lagoon

The Town of Palm Beach is an incorporated town in Palm Beach County, Florida, United States. The Intracoastal Waterway separates it from the neighboring cities of West Palm Beach and Lake Worth. In 2000, Palm Beach had a year-round population of 10,468, with an estimated seasonal population of 30,000.

Prior to Flagler, Palm Beach was sparsely populated, and was a part of Lake Worth.

Palm Beach was established as a resort by Henry Morrison Flagler, who made the Atlantic coast barrier island accessible via his Florida East Coast Railway. The nucleus of the community was established by Flagler's two luxury resort hotels, the Royal Poinciana Hotel and The Breakers Hotel. West Palm Beach was built across Lake Worth as a service town and has become a major city in its own right.

Flagler's house lots were bought by the beneficiaries of the Gilded Age, and in 1902 Flagler himself built a Beaux-Arts mansion, Whitehall, designed by the New York–based firm Carrère and Hastings and helped establish the Palm Beach winter "season" by constantly entertaining. The town was incorporated on 17 April 1911.

An area known as the Styx housed many of the servants, most of whom were black. The workers rented their small houses from the landowners. In the early 1900s the landowners agreed to evict all of the residents of the Styx (who moved to West Palm Beach, Florida) and Edward R. Bradley bought up much of this land. The houses were razed, according to the Palm Beach Daily News.

The coconut palm, Cocos nucifera, is not native to Florida (nor anywhere else in the United States). Its presence in Palm Beach is due to the shipwreck of the Spanish ship Providencia in 1878, near Mar-a-Lago. It was traveling from Havana to Cádiz, Spain with a cargo of coconuts. Since the shipwreck was near the shore, the coconuts were salvaged, and many were planted. A lush grove of palm trees soon grew on what was later named Palm Beach.

Palm Beach is the easternmost town in Florida, located on a 16-mile (26 km) long barrier island.

Palm Beach has a tropical rainforest climate. This is a Köppen climate classification of "Af" where it is tropical and there is no dry season.

It is wetter in the summer, from May to October, when convective thunderstorms and tropical downpours are common, and weak tropical lows pass nearby. Average high temperatures in Palm Beach are 86 to 90 °F (30 to 32 °C) with lows of 70 to 75 °F (21 to 24 °C). During this period, more than half of the summer days bring occasional afternoon thunderstorms and seabreezes that somewhat cool the rest of the day.

The annual average precipitation is 61 in (1,500 mm), most of which occurs during the summer season from May through October. However, rainfall can occur in any month, primarily as short-lived heavy afternoon thunderstorms. Palm Beach reports more than 2900 hrs of sunshine annually. Although rare, tropical cyclones can impact Palm Beach, with the last direct hit in 1928.

Palm Beach has a median household income of $124,562 and a median family income of $137,867. The town's affluence and its "abundance of pleasures" and "strong community-oriented sensibility" were cited when it was selected in June 2003 as America's "Best Place to Live" by Robb Report magazine.

The city is served by Palm Beach International Airport and Amtrak, as well as Tri-Rail—all located in West Palm Beach and connecting Palm Beach to Miami. Public transportation is available through Palm Tran, and connects with the rest of the county.

Private vehicles and taxis are the predominant means of transport in Palm Beach. Bicycles are a popular transport on the island, although most areas have no bicycle trails, so safe and comfortable travel is not always assured. The Lake Trail, exclusively for pedestrian and bike traffic, extends from Royal Palm Way (State Road 704) in the south up to the north end of the island. The trail follows the edge of the Lake Worth Lagoon (part of the intercoastal waterway) except for a section between the Flagler Museum and the Biltmore Condominiums, where the trail follows the streets. Another break occurs to pass around the Sailfish Yacht Club in the north end of the island. The Lake Trail is filled daily with bikers, rollerbladers, runners, and dog-walkers.

Traveling by bike along the ocean can be hazardous. Only a short section in the downtown area has sidewalks. The roads along the ocean are narrow and have small or no shoulders, making biking a potentially dangerous activity in those areas.

In the southern end of the island, south of Sloan's Curve, through South Palm Beach to East Ocean Avenue (linking to Lantana) is a two-mile long, relatively wide pedestrian path that is popular with walkers, runners, and bikers alike.

Night view of the Big Kapok tree near Flagler Museum

All content from Kiddle encyclopedia articles (including the article images and facts) can be freely used under Attribution-ShareAlike license, unless stated otherwise. Cite this article:
Palm Beach, Florida Facts for Kids. Kiddle Encyclopedia.