Kids Encyclopedia Facts
This page is about the museum in Florida. For other institutions with similar names, see Norton Museum (disambiguation).

The Norton Museum of Art is an art museum located in West Palm Beach, Florida. Its collection includes over 7,000 works, with a concentration in European, American, and Chinese art as well as in contemporary art and photography. In 2003, it overtook the John and Mable Ringling Museum of Art, in Sarasota, and became the largest museum in Florida.

Norton, the former head of the Chicago-based Acme Steel Co., moved to West Palm Beach upon retirement and decided to share his sizable collection of paintings and sculpture. The late Art Deco/Neoclassical building designed by Marion Sims Wyeth opened its doors to the public on February 8, 1941. Its mission statement is "to preserve for the future the beautiful things of the past."

Under the leadership of its director Hope Alswang from 2010 until 2019, the Norton Museum of Art raised $100 million, which it put toward a plan called the “New Norton.” That initiative involved adding 35 percent more gallery space to the museum, as well as a new auditorium and dining area.

In 2001, the Norton Museum of Art underwent a significant expansion when the 45,000-square-foot (4,200 m2) Gail and Melvin Nessel Wing was built and increased the size of the museum to 122,500 square feet (11,380 m2). Constructed over two years, it was opened to the public in 2003. The expansion created more space to display art in both the new and existing areas, increasing the Norton's gallery space by 75 percent, allowing more opportunities for the museum's permanent collection. The wing includes 14 new galleries, an enclosed courtyard to accommodate a variety of educational and social events, a glass ceiling installation commissioned from Dale Chihuly, a cantilevered spiral staircase, and three-story atrium designed to evoke the museum's art. The J. Ira and Nicki Harris Family Pavilion is a wedge-shaped meeting and reception space off to one side. The new wing was designed by Chad Floyd of the Connecticut-based Centerbrook Architects & Planners. 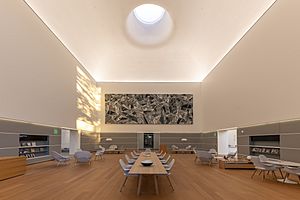 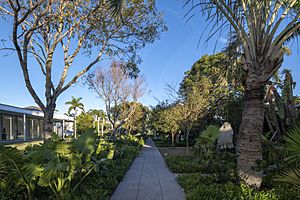 The Pamela and Robert B. Goergen Garden walkway

In 2013, the museum unveiled a $60 million master plan designed by the British architect Norman Foster that would nearly double its gallery space and add an education center, auditorium and restaurant. The new West Wing added a 43 ft-high Great Hall. A parking lot next to the museum was converted into a 9,000 square feet (840 m2) sculpture garden. A new entrance and forecourt along the main thoroughfare, South Dixie Highway, re-established the axial layout of the Norton’s original 1941 Art Deco building. As planned, the museum broke ground in 2016. 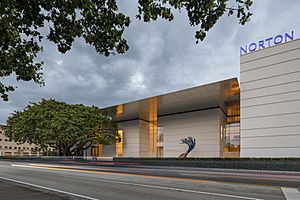 After 8 months of being closed in 2020 due to the Covid-19 pandemic, the Norton Museum of Art will be opening again on November 2020, 2020. Additionally, 4 new exhibits will be joining this museum in the beginning of 2021. When it reopens, it will only be open during the weekend, Friday to Sunday, with reservations required to attend.

The ground-level galleries showcase contemporary American art. The top floor is given over to European art through 1870.

In early 2018, the Norton Museum of Art received a gift of more than 100 works from the collection of Howard and Judie Ganek, including artworks by Damien Hirst, Anselm Kiefer, Sigmar Polke, Ed Ruscha, Kara Walker, Donald Judd, Matthew Barney, Nan Goldin, Cindy Sherman, Lorna Simpson, and Pipilotti Rist, among others.

In 2012, the Norton Museum of Art launched the Rudin Prize for Emerging Photographers, which comes with a $20,000 prize. It was an initiated by Beth Rudin DeWoody and is given biennially to an emerging photographer who has never had a museum show.

The inaugural Rudin Prize was awarded to Analia Saban, nominated by John Baldessari. The other nominees were:

The second Rudin Prize was awarded to Rami Maymon, nominated by Adi Nes. The other nominees were:

The third Rudin Prize was awarded to Elizabeth Bick, nominated by Shirin Neshat. The other nominees were:

All content from Kiddle encyclopedia articles (including the article images and facts) can be freely used under Attribution-ShareAlike license, unless stated otherwise. Cite this article:
Norton Museum of Art Facts for Kids. Kiddle Encyclopedia.