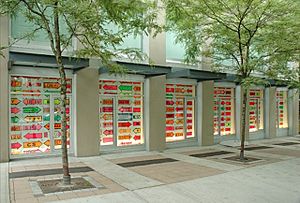 The institutions of contemporary art

Individual collectors can wield considerable influence. Charles Saatchi has dominated the contemporary art market in Britain since the 1980s; the subtitle of the 1999 book Young British Artists: The Saatchi Decade uses of the name of the private collector to define an entire decade of contemporary art production.

The institutions of art have been criticised for regulating what is designated as contemporary art. Outsider art, for instance, is literally contemporary art, in that it is produced in the present day. However, it is not considered so because the artists are self-taught and are assumed to be working outside of an art historical context. Craft activities, such as textile design, are also excluded from the realm of contemporary art, despite large audiences for exhibitions. Attention is drawn to the way that craft objects must subscribe to particular values in order to be admitted. "A ceramic object that is intended as a subversive comment on the nature of beauty is more likely to fit the definition of contemporary art than one that is simply beautiful."

At any one time a particular place or group of artists can have a strong influence on globally produced contemporary art; for instance New York artists in the 1980s.

Contemporary art can sometimes seem at odds with a public that does not feel that art and its institutions share its values. In Britain in the 1990s contemporary art became a part of popular culture, with artists becoming stars, but this did not lead to a hoped for "cultural utopia".

A common concern since the early part of the 20th century is the question of what constitutes art. This concern can be seen running through the "modern" and "postmodern" periods. The concept of avant-garde may come into play in determining what art is taken notice of by galleries, museums, and collectors. Serious art is ultimately exceedingly difficult to distinguish definitively from art that falls short of that designation.

Some competitions, awards and prizes in contemporary art are:

This table lists art movements by decade. It should not be assumed to be conclusive.

All content from Kiddle encyclopedia articles (including the article images and facts) can be freely used under Attribution-ShareAlike license, unless stated otherwise. Cite this article:
Contemporary art Facts for Kids. Kiddle Encyclopedia.