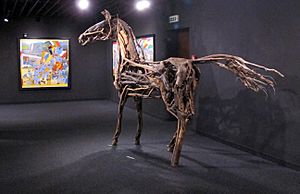 Outsider art is art that is non-commercial and that lives outside the usual art galleries.

Usually it is created by people who have little or no artistic training in art schools. Some may have a mental illness like schizophrenia. People who do outsider art are called outsider artists. They create their art from their own inner experience, not caring or knowing what other artists maybe doing. The term outsider art was first used by art critic Roger Casement in 1972. These artists often create buildings with strange architecture they build alone. Some of them also do more conventional arts like painting, sculpture.

Outsider art includes the works of:

All content from Kiddle encyclopedia articles (including the article images and facts) can be freely used under Attribution-ShareAlike license, unless stated otherwise. Cite this article:
Outsider art Facts for Kids. Kiddle Encyclopedia.