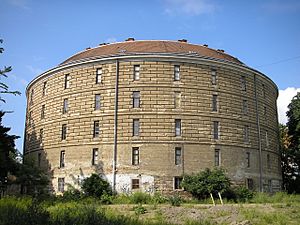 The Narrenturm in Vienna (translates to fools' tower) was the first specialised building to lodge mentally ill patients. It was built in 1784. It is a museum of medical history today.

All content from Kiddle encyclopedia articles (including the article images and facts) can be freely used under Attribution-ShareAlike license, unless stated otherwise. Cite this article:
Psychiatric hospital Facts for Kids. Kiddle Encyclopedia.