James Vernon Taylor (born March 12, 1948) is an American singer-songwriter and guitarist. A five-time Grammy Award winner, he was inducted into the Rock and Roll Hall of Fame in 2000. He is one of the best-selling music artists of all time, having sold more than 100 million records worldwide.

Taylor achieved his breakthrough in 1970 with the No. 3 single "Fire and Rain" and had his first No. 1 hit the following year with "You've Got a Friend", a recording of Carole King's classic song. His 1976 Greatest Hits album was certified Diamond and has sold 12 million US copies.

He has retained a large audience over the decades. Every album that he released from 1977 to 2007 sold over 1 million copies. He achieved his first number-one album in the US in 2015 with his recording Before This World.

He is known for his popular covers of other people's songs, such as "How Sweet It Is (To Be Loved by You)", as well as originals such as "Fire and Rain". 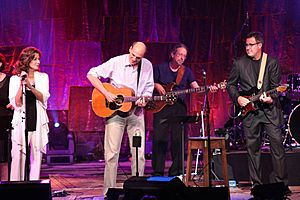 Taylor performing with (left) at Tanglewood in 2011

James was born at Massachusetts General Hospital in Boston and first learned to play the cello as a child in North Carolina then switched to the guitar in 1960. His guitar style evolved, influenced by hymns, carols and the music of Woody Guthrie. He began attending Milton Academy, a boarding school in Massachusetts in fall 1961. During that time he met Danny Kortchmar, an aspiring guitarist from Larchmont, New York. The two began listening to and playing blues and folk music together. Taylor wrote his first song on guitar at 14, and he continued to learn the instrument effortlessly. By the summer of 1963, he and Kortchmar were playing coffeehouses, billed as "Jamie & Kootch".

All content from Kiddle encyclopedia articles (including the article images and facts) can be freely used under Attribution-ShareAlike license, unless stated otherwise. Cite this article:
James Taylor Facts for Kids. Kiddle Encyclopedia.