Paul Simon (born October 13, 1941) is an American musician and song writer. He became famous as a member of Simon and Garfunkel, with his friend, Art Garfunkel. He wrote their songs. The two went their separate ways in the early 1970s and since then Simon has become a successful solo artist.

Paul Simon had his first success in 1958 when his song "Hey Schoolgirl" got to Number 49 on the US charts. He was performing with his friend Art Garfunkel in an act called "Tom and Jerry". His next success was in 1965 with "Sounds of Silence" which went to Number 1. This was also performed with Garfunkel under the name "Simon and Garfunkel.

Some of Simon's most famous songs include "Slip Sliding Away", "American Tune", "Late in the Evening", "Still Crazy After All These Years", "Me and Julio Down By the School Yard" and "50 Ways to Leave Your Lover". His 1986 album Graceland is very well-known. He is still producing music. His newest album is called Surprise.

Simon has received three honorary doctorates in music, including one from Yale University and one from Berklee College of Music. In 2006, Time said that he was one of the 100 people who shape our world.

Simon has earned sixteen Grammys for his solo and collaborative work, including three for Album of the Year (Bridge Over Troubled Water, Still Crazy After All These Years, and Graceland), and a Lifetime Achievement Award. In 2001, he was inducted into the Rock and Roll Hall of Fame and in 2006 was selected as one of the "100 People Who Shaped the World" by Time. In 2011, Rolling Stone named Simon one of the 100 greatest guitarists. In 2015, he was named one of the 100 Greatest Songwriters of All Time by Rolling Stone. Among many other honors, Simon was the first recipient of the Library of Congress's Gershwin Prize for Popular Song in 2007. In 1986, he was awarded an Honorary Doctor of Music degree from Berklee College of Music, where he currently serves on the Board of Trustees. 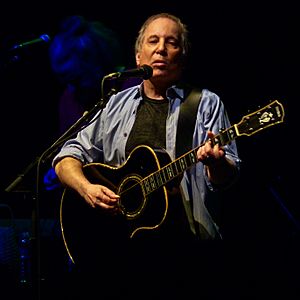 Paul Simon performing at the 9-30 Club

When Simon moved to England in 1964, he met Kathleen Mary "Kathy" Chitty (born 1947) on April 12, 1964, at the first English folk club he played, Railway Inn Folk Club in Brentwood, Essex, where Chitty worked part-time selling tickets. She was 16, and he was 22, when they began a relationship. Later that year they visited the U.S. together, touring around mainly by bus. Kathy returned to England on her own with Simon returning to her some weeks later. When Simon returned to the U.S. with the growing success of "The Sound of Silence", Kathy, who was quite shy, wanted no part of the success and fame that awaited Simon and they ended their relationship. She is mentioned by name in at least two of his songs: "Kathy's Song" and "America," and is referred to in "Homeward Bound" and "The Late Great Johnny Ace." There is a photo of Simon and Kathy on the cover of The Paul Simon Songbook.

His second marriage, from 1983 to 1984, was to actress and author Carrie Fisher to whom he proposed after a New York Yankees game. The song "Hearts and Bones" was written about this relationship. The song "Graceland" is also thought to be about seeking solace from the end of this relationship by taking a road trip. A year after divorcing, Simon and Fisher resumed their relationship, which lasted for several years. The final song in the sequence of three about Carrie Fisher is "She Moves On". This song marks the end of the post-marriage relationship and was an album track on Paul Simon's 1990 album The Rhythm of The Saints.

Simon married singer Edie Brickell on May 30, 1992. They have three children: Adrian, Lulu, and Gabriel.

All content from Kiddle encyclopedia articles (including the article images and facts) can be freely used under Attribution-ShareAlike license, unless stated otherwise. Cite this article:
Paul Simon Facts for Kids. Kiddle Encyclopedia.