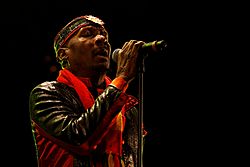 Jimmy Cliff OM (born James Chambers; 1 April 1948) is a Jamaican ska and reggae musician, singer and actor. He is best known for his songs "Wonderful World, Beautiful People", "Many Rivers to Cross", "You Can Get It If You Really Want", "The Harder They Come", "Reggae Night" and "Hakuna Matata". He is also well known for his covers of Cat Stevens' "Wild World" and Johnny Nash's "I Can See Clearly Now" from the movie Cool Runnings (1993). He also appeared in the movies The Harder They Come (1972) and Club Paradise (1986).

Cliff was born in Somerton District, Saint James. He was a Christian before becoming a Muslim. He is no longer religious. He is married has a daughter Lilty Cliff and a son Aken Cliff.

All content from Kiddle encyclopedia articles (including the article images and facts) can be freely used under Attribution-ShareAlike license, unless stated otherwise. Cite this article:
Jimmy Cliff Facts for Kids. Kiddle Encyclopedia.