Elvis Costello (born Declan Patrick MacManus, 25 August 1954) is an English singer and songwriter. He was born in London. He was an important musician in the late 1970s punk rock and new wave music styles. In the 1980s, he played an original style of rock and roll. Later he wrote and performed music in a number of different styles from classical to jazz.

Costello has won multiple awards in his career. These include a Grammy Award. He has twice been nominated for the Brit Award for Best British Male. In 2003, Elvis Costello & the Attractions were inducted into the Rock and Roll Hall of Fame. In 2004, Rolling Stone ranked Costello number 80 on their list of the 100 Greatest Artists of All Time. 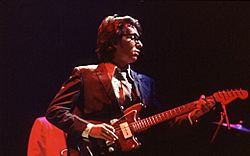 Elvis Costello during his brief time as a guitarist, 1979.

Costello appeared with his friend Burt Bacharach in the 1999 Austin Powers movie. They played "I'll Never Fall In Love Again" during the scene where Mike Myers danced with Heather Graham.

In 2010, Elvis Costello appeared as himself in David Simon's television series, Treme.

In 2011, Elvis Costello appeared as himself on Sesame Street. He did a song with Elmo and Cookie Monster, titled "Monster Went and Ate My Red 2", a play on "(The Angels Wanna Wear My) Red Shoes".

All content from Kiddle encyclopedia articles (including the article images and facts) can be freely used under Attribution-ShareAlike license, unless stated otherwise. Cite this article:
Elvis Costello Facts for Kids. Kiddle Encyclopedia.