Many of Toussaint's songs became familiar through cover versions by other musicians, including "Working in the Coal Mine", "Ride Your Pony", "Fortune Teller", "Play Something Sweet", "Southern Nights", "Everything I Do Gonna Be Funky", "I'll Take a Melody", "Get Out of My Life, Woman" and "Mother-in-Law".

In 1960, Toussaint was hired as a record producer by a label in New Orleans. He was also looking for new talent to sign to the label, named Minit Records. Toussaint played piano, wrote, and produced many hit records in the early and mid 1960s for New Orleans R&B artists. Some examples are: 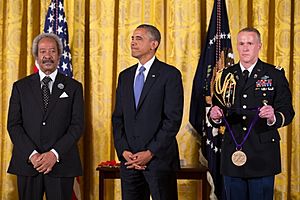 In 2013 he was awarded the National Medal of Arts by President Barack Obama.

Toussaint died while touring in Madrid, Spain after suffering a heart attack at his hotel, aged 77.

Toussaint’s two marriages ended in divorce. He is survived by his two children, son Clarence (better known as Reginald) and daughter Alison, and by several grandchildren. His children had managed his career in recent years.

All content from Kiddle encyclopedia articles (including the article images and facts) can be freely used under Attribution-ShareAlike license, unless stated otherwise. Cite this article:
Allen Toussaint Facts for Kids. Kiddle Encyclopedia.