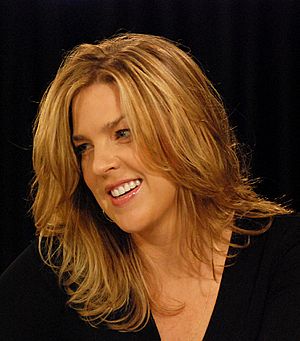 Krall began to play the piano when she was four years old. She began to play in restaurants when she was 15. When she was 17, she won a Vancouver Jazz Festival scholarship (student money award) to study music at the Berklee College of Music in Boston. She later moved to Los Angeles to study with Jimmy Rowles. In 1990, she moved to New York City.

Krall's 1996 album All For You, was a tribute (way to honour someone) to the Nat King Cole trio. It was on the Billboard jazz charts for 70 weeks. The album was considered for a Grammy Award. She won a Grammy in 1999 for "Best Jazz Musician of the Year". Her 2001 album The Look of Love was #1 in Canada. It also won the Juno Award as Canadian album of the year. Her 2002 album Live in Paris won the Grammy for Best Vocal Jazz Record. Also in 2002, Krall won the Juno for Canadian artist of the year. Her version of the Tom Waits song "Temptation" made #1 on the World Jazz Charts in 2004.

All content from Kiddle encyclopedia articles (including the article images and facts) can be freely used under Attribution-ShareAlike license, unless stated otherwise. Cite this article:
Diana Krall Facts for Kids. Kiddle Encyclopedia.