Charlottesville was the home of two Presidents, Thomas Jefferson and James Monroe. While both served as Governor of Virginia, they lived in Charlottesville, and traveled to and from Richmond, along the 71-mile (114 km) historic Three Notch'd Road. Orange, located 26 miles (42 km) northeast of the city, was the hometown of President James Madison.

The University of Virginia, founded by Thomas Jefferson and one of the original Public Ivies, straddles the city's southwestern border with Albemarle. Monticello, located 3 miles (4.8 km) southeast of the city, is a UNESCO World Heritage Site. Located on a hilltop overlooking Charlottesville, Monticello attracts thousands of tourists every year.

At the time of European encounter, part of the area that became Charlottesville was occupied by a Monacan village called Monasukapanough.

Charlottesville was formed in 1762 by an Act of the Assembly of Albemarle County. Thomas Walker was named its first trustee. It was along a trade route called Three Notched Road (present day U.S. Route 250) which led from Richmond to the Great Valley. It was named for Charlotte of Mecklenburg-Strelitz, queen consort of the United Kingdom as the wife of King George III. 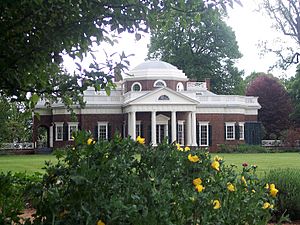 A view of Monticello from its gardens

During the American Revolutionary War, the Convention Army was imprisoned in Charlottesville between 1779 and 1781 at the Albemarle Barracks. The Governor and legislators had to temporarily abandon the capitol and on June 4, 1781, Jack Jouett warned the Virginia Legislature meeting at Monticello of an intended raid by Banastre Tarleton, allowing a narrow escape.

Unlike much of Virginia, Charlottesville was spared the brunt of the American Civil War. The only battle to take place in Charlottesville was the skirmish at Rio Hill, an encounter in which George Armstrong Custer briefly engaged local Confederate home guards before he retreated. The mayor surrendered the city to Custer's men to keep the town from being burned. The Charlottesville Factory, founded ca. 1820–30, was accidentally burnt during General Sheridan's 1865 raid through the Shenandoah Valley. The factory had been taken over by the Confederacy and used to manufacture woollen clothing for the soldiers. It caught fire when some coals taken by Union troops to burn the nearby railroad bridge had been dropped on the floor. The factory was rebuilt immediately and was known as the Woolen Mills until its liquidation in 1962.

The first black church in Charlottesville was established in 1864. Previously, it was illegal for African-Americans to have their own churches, although they could worship in white churches. A current predominantly African-American church can trace its lineage to that first church. Congregation Beth Israel's 1882 building is the oldest synagogue building still standing in Virginia.

In the fall of 1958, Charlottesville closed its segregated white schools as part of Virginia's strategy of massive resistance to federal court orders requiring integration as part of the implementation of the Supreme Court of the United States decision Brown v. Board of Education. The closures were required by a series of state laws collectively known as the Stanley plan. Negro schools remained open, however.

Charlottesville is the home of the National Radio Astronomy Observatory headquarters, the Leander McCormick Observatory and the CFA Institute. It is served by two area hospitals, the Martha Jefferson Hospital founded in 1903, and the University of Virginia Hospital.

The National Ground Intelligence Center (NGIC) is in the Charlottesville area. Other large employers include Crutchfield, GE Intelligent Platforms, PepsiCo and SNL Financial.

According to the United States Census Bureau, the city has a total area of 10.3 square miles (27 km2), virtually all of which is land.

Charlottesville is located in the center of the Commonwealth of Virginia along the Rivanna River, a tributary of the James, just west of the Southwest Mountains, itself paralleling the Blue Ridge about 20 miles (32 km) to the west. 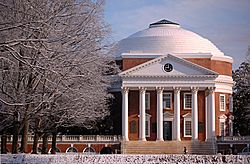 The Rotunda at the University of Virginia, designed by Thomas Jefferson 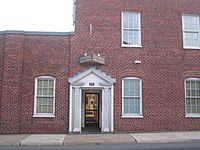 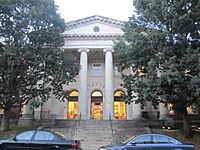 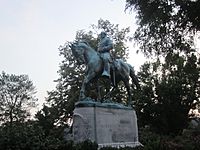 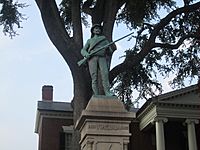 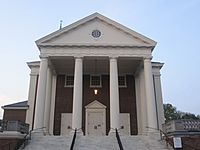 First United Methodist Church in the historic district of downtown Charlottesville (pictured July 2011) has since been renovated.

Charlottesville has a large series of attractions and venues for its relatively small size. Visitors come to the area for wine and beer tours, ballooning, hiking, and world-class entertainment that perform at one of the area's four larger venues. The city is both the launching pad and home of the Dave Matthews Band as well as the center of a sizable indie music scene.

The nearby Shenandoah National Park offers recreational activities and beautiful scenery, with rolling mountains and many hiking trails. Skyline Drive is a scenic drive that runs the length of the park, alternately winding through thick forest and emerging upon sweeping scenic overlooks. The Blue Ridge Parkway, a similar scenic drive that extends 469 miles (755 km) south to Great Smoky Mountains National Park in North Carolina, terminates at the southern entrance of Shenandoah, where it turns into Skyline Drive. This junction of the two scenic drives is only 22 miles (35 km) west of downtown Charlottesville.

Charlottesville's downtown is a center of business for Albemarle County. It is home to the Downtown Mall, one of the longest outdoor pedestrian malls in the nation, with stores, restaurants, and civic attractions. The renovated Paramount Theater hosts various events, including Broadway shows and concerts. Local theatrics downtown include Charlottesville's community theater Live Arts. Outside downtown are the New Lyric Theatre and Heritage Repertory Theatre at UVa. Other attractions on the Downtown Mall are the Virginia Discovery Museum and a 3,500 seat outdoor amphitheater, the Sprint Pavilion (formerly the nTelos Wireless Pavilion). Court Square, just a few blocks from the Downtown Mall, is the original center of Charlottesville and several of the historic buildings there date back to the city's founding in 1762. 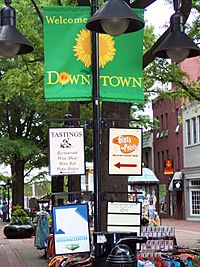 Charlottesville also is home to the University of Virginia (most of which is legally in Albemarle County). During the academic year more than 20,000 students pour into Charlottesville to attend the university. Its main grounds are located on the west side of Charlottesville, with Thomas Jefferson's Academical Village, known as the Lawn, as the centerpiece. The Lawn is a long esplanade crowned by two prominent structures, The Rotunda (designed by Jefferson) and Old Cabell Hall (designed by Stanford White). Along the Lawn and the parallel Range are dormitory rooms reserved for distinguished students. The University Programs Council is a student-run body that programs concerts, comedy shows, speakers, and other events open to the students and the community, such as the annual "Lighting of the Lawn". One block from The Rotunda, the University of Virginia Art Museum exhibits work drawn from its collection of more than 10,000 objects and special temporary exhibitions from sources nationwide. It is also home to the Judge Advocate General's Legal Center and School where all U.S. Army military lawyers, known as "JAGs", take courses specific to military law. 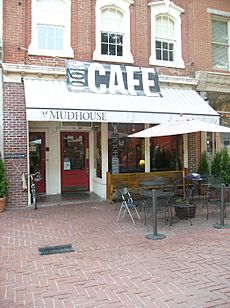 Mudhouse Coffeehouse on the Downtown Mall

The Corner is the commercial district abutting the main grounds of UVa, along University Avenue. This area is full of college bars, eateries, and UVa merchandise stores, and is busy with student activity during the school year. Pedestrian traffic peaks during UVa home football games and graduation ceremonies. Much of the University's Greek life is on nearby Rugby Road, contributing to the nightlife and local bar scene. West Main Street, running from the Corner to the Downtown Mall, is a commercial district of restaurants, bars, and other businesses.

Charlottesville is host to the annual Virginia Film Festival in October, the Charlottesville Festival of the Photograph in June, and the Virginia Festival of the Book in March. In addition, the Foxfield Races are steeplechase races held in April and September of each year. A Fourth of July celebration, including a Naturalization Ceremony, is held annually at Monticello, and a First Night celebration has been held on the Downtown Mall since 1982.

Charlottesville was once a major rail hub, served by both the Chesapeake and Ohio Railway (C&O) and the Southern Railway. The first train service to Charlottesville began in the early 1850s by the Louisa Railroad Company, which became the Virginia Central Railroad before becoming the C&O. The Southern Railway started service to Charlottesville around the mid-1860s with a north-south route crossing the C&O east-west tracks. The new depot which sprang up at the crossing of the two tracks was called Union Station. In addition to the new rail line, Southern located a major repair shop which produced competition between the two rail companies and bolstered the local economy. The Queen Charlotte Hotel went up on West Main street along with restaurants for the many new railroad workers.

The former C&O station on East Water Street was turned into offices in the mid-1990s. Union Station, still a functional depot for Amtrak, is located on West Main street between 7th and 9th streets where the tracks of the former C&O Railway (leased by C&O successor CSX to Buckingham Branch Railroad) and Southern (now Norfolk Southern Railway) lines cross. Amtrak and the city of Charlottesville finished refurbishing the station just after 2000, upgrading the depot and adding a full-service restaurant. The Amtrak Crescent travels on Norfolk Southern's dual north-south tracks. The Amtrak Cardinal runs on the Buckingham Branch east-west single track, which follows U.S. Route 250 from Staunton to a point east of Charlottesville near Cismont. The eastbound Cardinal joins the northbound Norfolk Southern line at Orange, on its way to Washington, D.C.

Charlottesville also had an electric streetcar line, the Charlottesville and Albemarle Railway (C&A), that operated during the early twentieth century. Streetcar lines existed in Charlottesville since the late 1880s under various names until organized as the C&A in 1903. The C&A operated streetcars until 1935, when the line shut down due to rising costs and decreased ridership. 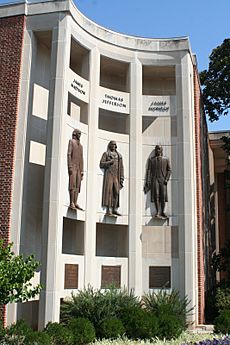 There were 17,778 households out of which 17.9% had children under the age of 18 living with them, 28.1% were married couples living together, 11.3% had a female householder with no husband present, and 57.7% were non-families. 34.1% of all households were made up of individuals and 7.5% had someone living alone who was 65 years of age or older. The average household size was 2.31 and the average family size was 2.91.

All content from Kiddle encyclopedia articles (including the article images and facts) can be freely used under Attribution-ShareAlike license, unless stated otherwise. Cite this article:
Charlottesville, Virginia Facts for Kids. Kiddle Encyclopedia.