John Ray Grisham, Jr. ( born February 8, 1955) is an American bestselling writer, attorney, politician, and activist best known for his popular legal thrillers. His books have been translated into 42 languages and published worldwide.

John Grisham graduated from Mississippi State University before attending the University of Mississippi School of Law in 1981. He practiced criminal law for about a decade and served in the House of Representatives in Mississippi from January 1984 to September 1990.

His first novel, A Time to Kill, was published in June 1989, four years after he began writing it. As of 2012, his books have sold over 275 million copies worldwide. A Galaxy British Book Awards winner, Grisham is one of only three authors to sell 2 million copies on a first printing.

Grisham's first bestseller, The Firm, sold more than seven million copies. The book was adapted into a 1993 feature film of the same name, starring Tom Cruise, and a 2012 TV series which "continues the story of attorney Mitchell McDeere and his family 10 years after the events of the film and novel." Eight of his other novels have also been adapted into films: The Chamber, The Client, A Painted House, The Pelican Brief, Skipping Christmas, The Rainmaker, The Runaway Jury, and A Time to Kill.

Grisham, the second of five siblings, was born in Jonesboro, Arkansas, to Wanda Skidmore Grisham and John Grisham. His father worked as a construction worker and a cotton farmer, while his mother was a homemaker. When Grisham was four years old, his family settled in Southaven, DeSoto County, Mississippi. As a child, Grisham wanted to be a baseball player. Grisham has been a Christian since he was eight years old, and he describes his conversion to Christianity as "the most important event" in his life. After leaving law school, he participated in some missionary work in Brazil, under the First Baptist Church of Oxford.

Although Grisham's parents lacked formal education, his mother encouraged him to read and prepare for college. He drew on his childhood experiences for his novel A Painted House. Grisham started working for a nursery as a teenager, watering bushes for US$1.00 an hour. He was soon promoted to a fence crew for US$1.50 an hour. He wrote about the job: "there was no future in it". At 16, Grisham took a job with a plumbing contractor but says he "never drew inspiration from that miserable work". Through a contact of his father's, he managed to find work on a highway asphalt crew in Mississippi at age 17. It was during this time that an unfortunate incident got him "serious" about college. A fight with gunfire broke out among the crew causing Grisham to run to a nearby restroom to find safety. He did not come out until after the police had detained the perpetrators. He hitchhiked home and started thinking about college. His next work was in retail, as a salesclerk in a department store men's underwear section, which he described as "humiliating". He decided to quit but stayed when he was offered a raise. He was given another raise after asking to be transferred to toys and then to appliances. A confrontation with a company spy posing as a customer convinced him to leave the store. By this time, Grisham was halfway through college. Planning to become a tax lawyer, he was soon overcome by "the complexity and lunacy" of it. He decided to return to his hometown as a trial lawyer.

Grisham married Renee Jones on May 8, 1981. The couple have two children together: Shea and Ty. The family splits their time between their Victorian home on a farm outside Oxford, Mississippi, and a home near Charlottesville, Virginia. They own a home in Destin, Florida.

In 2008, he and his wife bought a condominium at McCorkle Place in Chapel Hill, North Carolina.

As a Baptist, he advocates the separation of church and state. He has said, "I have some very deep religious convictions that I keep to myself, and when I see people using them for political gain it really irritates me."

Grisham has a lifelong passion for baseball demonstrated partly by his support of Little League activities in both Oxford, Mississippi, and Charlottesville, Virginia. In 1996, Grisham built a $3.8 million dollar youth baseball complex. He remains a fan of Mississippi State University's baseball team and wrote about his ties to the university and the Left Field Lounge in the introduction for the book Dudy Noble Field: A Celebration of MSU Baseball. As part of his passion for sports, Grisham is a supporter of Virginia Cavaliers athletics. He has been spotted at various sporting events on-campus and it is believed he gave a $2 million donation to help renovate the Cavaliers' baseball stadium, Davenport Field. His son Ty played baseball at UVA. Ty now is an attorney specializing in criminal defense in Charlottesville, Virginia.

Grisham is a member of the Board of Directors of the Innocence Project, which campaigns to free and exonerate unjustly convicted people on the basis of DNA evidence. The Innocence Project argues that wrongful convictions are not isolated or rare events but instead arise from systemic defects. Grisham has testified before Congress on behalf of the Innocence Project. He also has appeared on Dateline NBC, Bill Moyers Journal on PBS, and other programs. He wrote for the New York Times in 2013 about an unjustly held prisoner at Guantanamo. Grisham opposes the death penalty – an opposition very strongly manifested in the plot of The Confession

The Mississippi State University Libraries, Manuscript Division, maintains the John Grisham Room, an archive containing materials generated during the author's tenure as Mississippi State Representative and relating to his writings.

In 2012 the Law Library was renamed in his honor. It has been named for more than a decade after the late Senator James Eastland.

In 2015, Grisham, along with about 60 others, signed a letter published in the Clarion-Ledger urging that an inset within the flag of Mississippi containing a Confederate flag be removed. He co-authored the letter with author Greg Iles; the pair contacted various public figures from Mississippi for support. 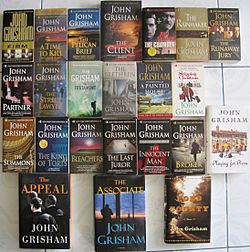 A complete listing of the works by John Grisham

† Denotes books not in the legal genre

All content from Kiddle encyclopedia articles (including the article images and facts) can be freely used under Attribution-ShareAlike license, unless stated otherwise. Cite this article:
John Grisham Facts for Kids. Kiddle Encyclopedia.