Julia Fiona Roberts (born October 28, 1967) is an American actress and producer. She became a Hollywood star after headlining the romantic comedy Pretty Woman (1990), which grossed $464 million worldwide. She has won three Golden Globe Awards (out of eight nominations) and has been nominated for four Academy Awards for her film acting, winning the Academy Award for Best Actress for her performance in Erin Brockovich (2000).

Her films have collectively brought box office receipts of over US$2.8 billion, making her one of the most successful actresses in terms of box office receipts. Roberts was nominated for the Primetime Emmy Award for Outstanding Supporting Actress in a Limited Series or Movie for her performance in the HBO television film The Normal Heart (2014). 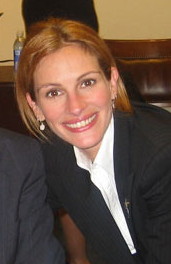 Roberts' parents, one-time actors and playwrights, met while performing in theatrical productions for the armed forces. They later co-founded the Atlanta Actors and Writers Workshop in Atlanta, off Juniper Street in Midtown. They ran a children's acting school in Decatur, Georgia. The children of Martin Luther King, Jr. and Coretta Scott King attended the school; Walter Roberts was their daughters Yolanda Denise King's acting coach.

From 1972, Roberts lived in Smyrna, Georgia, where she attended Fitzhugh Lee Elementary School, Griffin Middle School, and Campbell High School. Roberts wanted to be a veterinarian as a child. She also played the clarinet in her school band. After graduating from Smyrna's Campbell High School, she attended Georgia State University but did not graduate. She later headed to New York City to pursue a career in acting. Once there, she signed with the Click Modeling Agency and enrolled in acting classes. 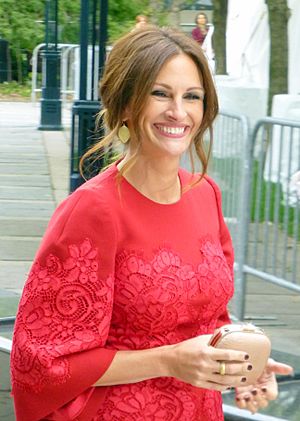 Roberts made her first big screen appearance in the film Satisfaction (1988), alongside Liam Neeson and Justine Bateman, as a band member looking for a summer gig. She had previously performed a small role opposite her brother Eric, in Blood Red (she has two words of dialogue), filmed in 1987, although it was not released until 1989. Her first critical success with moviegoers was her performance in the independent film Mystic Pizza in 1988; that same year, she had a role in the fourth-season finale of Miami Vice. In 1989, she was featured in Steel Magnolias, as a young bride with diabetes, and received both her first Academy Award nomination (as Best Supporting Actress) and first Golden Globe Award win (Motion Picture Best Supporting Actress) for her performance.

Roberts married country singer Lyle Lovett; the wedding took place at St. James Lutheran Church in Marion, Indiana. They separated in March 1995 and subsequently divorced. Roberts and her husband, cameraman Daniel Moder, met on the set of her film The Mexican in 2000, he and Roberts wed on July 4, 2002, at her ranch in Taos, New Mexico. Together, they have three children.

Roberts runs the production company Red Om Films with her sister, Lisa Roberts Gillan, and Marisa Yeres Gill. Through Red Om, Roberts served as an executive producer of the first four films of the American Girl film series (based on the American Girl line of dolls), released between 2004 and 2008.

All content from Kiddle encyclopedia articles (including the article images and facts) can be freely used under Attribution-ShareAlike license, unless stated otherwise. Cite this article:
Julia Roberts Facts for Kids. Kiddle Encyclopedia.