Smyrna was ranked #44 in Money's 2018 survey of "The Best Places to Live in America" for balancing economic growth, affordability, and quality of life.

Pioneers began settling the area in 1832. By the late 1830s, a religious encampment called Smyrna Camp Ground had become a popular travel destination and was well known throughout Georgia. It was named for the Biblical city of Smyrna, modern day Izmir in Turkey, the home of the famous Christian martyr Polycarp. After the completion of the Western and Atlantic Railroad in 1842 the area began to grow. It was known by several names until 1872 – Varner's Station, Ruff's Siding, Neal Dow and Ruff's Station. The city was incorporated with the name Smyrna in 1872.

Two Civil War battles occurred in the area, the Battle of Smyrna Camp Ground and the Battle of Ruff's Mill, both on July 4, 1864. The area's businesses, homes and 1849 covered bridge (since rebuilt and still in use today) were burned by Sherman's troops.

The nearby Bell Bomber plant that produced B-29 bombers during World War II was reopened by Lockheed in 1951 and became a catalyst for growth. The city's population grew during the next two decades, from 2,005 in 1950 to almost 20,000 by 1970.

The restaurant scene in the film Joyful Noise was shot at Howard's Restaurant in Smyrna in 2011.

Smyrna was ranked #4 in a 2014 study of the Best Cities for Young Adults in Georgia. 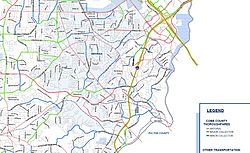 Smyrna is part of the Atlanta metropolitan area, located about 1 mile (1.6 km) northwest of the Atlanta city limits, and with Smyrna's downtown about 10 miles (16 km) from downtown Atlanta. Smyrna is located just west of the northern intersection of I-285 and I-75, which is the site of Cumberland and the Cobb Galleria. Smyrna is also near Vinings, Marietta, Mableton, Sandy Springs and the Buckhead district of Atlanta..

According to the United States Census Bureau, the city has a total area of 15.4 square miles (39.9 km2), of which 15.4 square miles (39.8 km2) is land and 0.04 square miles (0.1 km2), or 0.23%, is water. The general terrain of the area is characteristic of the Piedmont region of Georgia, characterized by hills with broad ridges, sloping uplands, and relatively narrow valleys. The center of Smyrna is about 1,060 feet (320 m) above sea level.

The city's official symbol is the jonquil (a flower). Known as the "Jonquil City", it derives this name from the thousands of jonquils that flourish in gardens and along the streets in early spring.

Some extensions of the Silver Comet Trail have been built further into Smyrna to expand access to the trail.

"Market Village" in the city center often has open-air concerts and festivals. There are also various small parks such as Cobb Park, public pools such as Aline Wolfe Center for the elderly and Tolleson park pool for the all ages, tennis courts and playgrounds and a linear park with walking trail along Spring Road.

The Atlanta Bread Company has its headquarters in Smyrna.

Companies with an office include Eaton Corporation and IBM. Smyrna was the site of the corporate offices of the now-defunct World Championship Wrestling.

Smyrna is also seen as a hotbed of small business.

According to the City's 2010 Comprehensive Annual Financial Report, the top employers in the city are:

On October 31, 2014, Emory Healthcare closed the Emory Adventist Hospital at Smyrna. They have since announced plans to renovate and reopen the hospital. 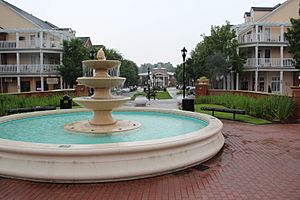 In 1991, the city began a community redevelopment project known as "Market Village," in order to create a well-defined downtown. Included were a community center and 28,000-square-foot (2,600 m2) public library. A mixed retail and residential district was modeled after an early 1900s city village, including a square with a fountain. This, and other expansions have revitalized the downtown area. Further redevelopment has occurred throughout the city—including thousands of new homes – mostly cluster homes, townhouse and condo communities replacing older neighborhoods. The population has risen as a result of redevelopment, a few annexations, and Smyrna's location as a residential suburb in the Northwest center of metro Atlanta.

There are additional mixed retail/residential/office redevelopments around the Market Village. Ground was broken in Jonquil Village, a redevelopment of Jonquil Plaza at the corner of Spring and Atlanta Road across from Market Village. However, this development stalled due to banks withdrawing funding during the nationwide real estate crash of 2007.

Less than a .5 miles (0.80 km) down, the city intends to redevelop the Belmont Hills plaza, at the corner of Windy Hill and Atlanta Road in 2011. Both these villages, like Market Village in Smyrna, and Market Square in Vinings, are designed to resemble a city village of yesteryear with fountains and antique street lamps. In 2011, Halpern Enterprises, the developer, sold some land to the city of Smyrna for an elementary school called the New Smyrna Elementary, which has completed construction. In 2012, Halpern rezoned the property but did not change its intended use. It moved residential from a multi-story building in one section of the development to apartment residential by itself in a larger and previously empty section of the development (pod F) due to market constraints in the only slowly warming housing market, leaving the earlier section available for any use in the future.

A Kroger plaza (known as "The Crossings") has been built at the corner of Concord Road and South Cobb Drive with some planned two-story outparcels. This is actually a re-development of an older blighted strip-mall. The Kroger located there is one of the largest in the country, at 93,000 square feet (8,600 m2).

Additional re-development is going on throughout the city, particularly along South Cobb Drive. The Sprouts Farmers Market organic grocery store on the East-West Connector / Cumberland Parkway was one of the first to be built east of the Mississippi River. Two outparcels have already been developed.

Additional work being done in Smyrna includes streetscape beautification projects, such as a linear park on Concord Road along with new signage, lights, and a median on Atlanta Road. Additional parkland projects are the 12-acre (4.9 ha) Taylor-Brawner Park, Riverview Road trail and Silver Comet Trail extensions in that area.

In September 2019, the James M. Cox Foundation gave $6 million to the PATH Foundation, which will connect the Silver Comet Trail terminus in Smyrna to the Atlanta Beltline. It is expected to be completed by 2022. The combined length of the Silver Comet and the Beltline will make it the longest paved trail surface in the U.S., totaling approximately 300 miles (480 kilometers); one could travel from Atlanta to Anniston, Alabama via the trail alone.

Smyrna is home to The Bright Side, Smyrna and Vinings' community newspaper. The paper is dedicated to publishing positive events that occur in Cobb County.

Smyrna also has multiple private schools including Covenant Christian School, Whitefield Academy, and a satellite campus of Buckhead Preparatory Academy. The Lovett School is also nearby.

Notables from the area include U.S. Representative Bob Barr; actress Julia Roberts; baseball stars who both played infield for the Atlanta Braves Gerald Perry & Ron Gant; current baseball player for the San Francisco Giants John Brebbia, Passion City Church Senior Pastor/Passion Conferences and sixstepsrecords founder Louie Giglio; and football player Tay Glover-Wright. Voice-over actor and animator C. Martin Croker was born in Smyrna. He is best known for his work on the cult classic show Space Ghost Coast to Coast. Recording artist and actress Kelly Nelon Clark was a long time resident and calls Smyrna her hometown. Recording artist and composer Benn Jordan owns a home and recording studio in Smyrna. Recording artist and composer Pat Terry is a lifelong resident of Smyrna. Eschel Rhoodie, the South African Secretary of the Department of Information from 1972 to 1977, resided in Smyrna after emigrating to the United States.

All content from Kiddle encyclopedia articles (including the article images and facts) can be freely used under Attribution-ShareAlike license, unless stated otherwise. Cite this article:
Smyrna, Georgia Facts for Kids. Kiddle Encyclopedia.