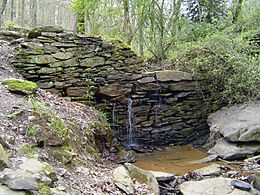 Ruins of the paper mill at Sope Creek

Marietta is a city in and the county seat of Cobb County, Georgia, United States. At the 2010 census, the city had a population of 56,579. The 2019 estimate was 60,867, making it one of Atlanta's largest suburbs. Marietta is the fourth largest of the principal cities by population of the Atlanta metropolitan area.

The origin of the name is uncertain. It is believed that the city was named for Mary Cobb, the wife of U.S. Senator and Superior Court judge Thomas Willis Cobb. Judge Cobb is the namesake of the county.

Homes were built by early settlers near the Cherokee town of Big Shanty (now Kennesaw) prior to 1824. The first plat was laid out in 1833. Like most towns, Marietta had a square in the center with a courthouse. The Georgia General Assembly legally recognized the community on December 19, 1834.

Built in 1838, Oakton House is the oldest continuously occupied residence in Marietta. The original barn, milk house, smokehouse, and wellhouse remain on the property. The spectacular gardens contain the boxwood parterre from the 1870s. Oakton served as Major General Loring's headquarters during the Battle of Kennesaw Mountain in 1864.

Marietta was initially selected as the hub for the new Western and Atlantic Railroad, and business boomed. By 1838, roadbed and trestles had been built north of the city. However, in 1840, political wrangling stopped construction for a time. In 1842, the railroad's new management decided to move the hub from Marietta to an area that would become Atlanta. Nonetheless, in 1850, when the railroad began operation, Marietta shared in the resulting prosperity.

Businessman and politician John Glover arrived in 1848. A popular figure, Glover was elected mayor when the city incorporated in 1852. Another early resident was Dr. Carey Cox, who promoted a "water cure", which developed into a spa that attracted patients to the area. The Cobb County Medical Society recognizes him as the county's first physician.

The Georgia Military Institute was built in 1851, and the first bank opened in 1855. During the 1850s, fire destroyed much of the city on three separate occasions.

By the time the Civil War began in 1861, Marietta had recovered from the fires.

In April 1862, James Andrews, a civilian working with the Union Army, came to Marietta, along with a small party of Union soldiers dressed in civilian clothing. The group spent the night in the Fletcher House hotel (later known as the Kennesaw House and now the home of the Marietta Museum of History) located immediately in front of the Western and Atlantic Railroad. Andrews and his men, who later became known as the Andrews Raiders, planned to seize a train and proceed north toward the city of Chattanooga, destroying the railroad on their way. They hoped, in so doing, to isolate Chattanooga from Atlanta and bring about the downfall of the Confederate stronghold. The Raiders boarded a waiting train on the morning of April 12, 1862, along with other passengers. Shortly thereafter, the train made a scheduled stop in the town of Big Shanty, now known as Kennesaw. When the other passengers got off the train for breakfast, Andrews and the Raiders stole the engine and the car behind it, which carried the fuel. The engine, called The General, and Andrews' Raiders had begun the episode now known as the Great Locomotive Chase. Andrews and the Raiders failed in their mission. Andrews and all of his men were caught within two weeks, including two men who had arrived late and missed the hijacking. All were tried as spies, convicted, and hanged.

General William Tecumseh Sherman invaded the town during the Atlanta Campaign in the summer of 1864. In November 1864, General Hugh Kilpatrick set the town ablaze, the first strike in Sherman's March to the Sea. Sherman's troops crossed the Chattahoochee River at a shallow section known as the Palisades, after burning the Marietta Paper Mills near the mouth of Sope Creek.

The Marietta Confederate Cemetery, with the graves of over 3,000 Confederate soldiers killed during the Battle of Atlanta, is located in the city. 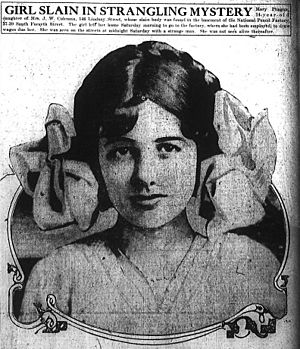 Mary Phagan as depicted in the Atlanta Journal

Marietta is located near the center of Cobb County, between Kennesaw to the northwest and Smyrna to the southeast. U.S. Route 41 and State Route 3 run through the city northeast of downtown as Cobb Parkway, and Interstate 75 runs parallel to it through the eastern part of Marietta, with access from exits 261, 263, 265, and 267. Downtown Atlanta is 20 miles (32 km) to the southeast, and Cartersville is 24 miles (39 km) to the northwest.

Marietta falls under the USDA 7b Plant Hardiness zone. 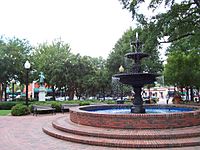 The city has six historic districts, some on the National Register of Historic Places (these include Northwest Marietta, Whitlock Avenue, Washington Avenue, and Church-Cherokee Streets). A seventh, along Kennesaw Avenue, is proving more controversial, and is still being considered as of March 2010[update]. The city's welcome center is located in the historic train depot.

Downtown is the town square and former location of the county courthouse. The square is the site of several cultural productions and public events, including a weekly farmers' market.

The Marietta Players perform semi-professional theater year round. The Strand Theatre has been renovated back to its original design and features classic films and other events.

The Marietta Museum of History exhibits the history of the city and county. The museum is home to thousands of artifacts including items from Marietta residents and businesses. The Marietta Gone with the Wind Museum, also called "Scarlett on the Square", houses a collection of memorabilia related to Gone with the Wind, both the book and the film.

Miramax Films and Disney filmed scenes of the 1995 movie Gordy here. The 2014 film Dumb and Dumber To filmed a scene in the Marietta Square.

The CSX freight trains between Atlanta and Chattanooga (Western & Atlantic Subdivision) still run a block west of the town square, past the former railroad depot (now the Visitor Center) and the Kennesaw House, one of only four buildings in Marietta not burned to the ground in Sherman's March to the Sea. The Kennesaw House is home to the Marietta Museum of History which tells the history of Marietta and Cobb County.

At least two books have been produced chronicling the history of the city in pictures:

Dobbins Air Reserve Base on the south side of town and a Lockheed Martin manufacturing plant are among the major industries in the city. The Lockheed Georgia Employees Credit Union is based in Marietta.

According to Marietta's 2010 Comprehensive Annual Financial Report, the top employers within the city were:

All of the public schools in Marietta proper are operated by the Marietta City Schools (MCS), while the remainder of the schools in Cobb County, but outside the city limits, is operated by the Cobb County School District, including all of the county's other cities. MCS has one high school, Marietta High School, grades 9-12; a middle school, Marietta Middle School, grades 7 and 8; Marietta Sixth Grade Academy; and several elementary schools: A.L. Burruss, Dunleith, Hickory Hills, Lockheed, Marietta Center for Advanced Academics, Park Street, Sawyer Road, and West Side. Many residents of Marietta attend Cobb County public schools, such as Joseph Wheeler High School and Sprayberry High School. These schools are known to compete fiercely in athletics, especially basketball, as both Wheeler and Marietta High School frequently produce D-1 players. The town of Marietta is also home to the Walker School, a private pre-kindergarten through 12th-grade school. Walker competes in the Georgia High School Association Class A (Region 6) athletic division while Marietta and Wheeler compete in Class AAAAAA (Regions 4 and 5, respectively).

The city operates Marietta Power under the auspices of the Board of Lights & Water.

The CSX freight trains between Atlanta and Chattanooga (Western & Atlantic Subdivision) still run a block west of the town square, past the 1898-built former railroad depot (now the Visitor Center).

Into the 1950s the Louisville and Nashville Railroad operated the Midwest-Florida trains, the Cincinnati-Florida Flamingo and the Chicago-Florida Southland, which made daily stops in Marietta Depot. Into the 1960s, the L&N's Chicago & St. Louis-Florida trains, Dixie Flyer and Dixie Limited also made stops there. The final train was the L&N's St. Louis, Missouri - Evansville, Iindiana - Atlanta Georgian which ended service on April 30, 1971. (Until 1968 the train also had a northern leg from Evansville to Chicago.)

All content from Kiddle encyclopedia articles (including the article images and facts) can be freely used under Attribution-ShareAlike license, unless stated otherwise. Cite this article:
Marietta, Georgia Facts for Kids. Kiddle Encyclopedia.