Kennesaw is a city in Cobb County, Georgia, United States, located in Cobb County, within the greater Atlanta metropolitan area. Known from its original settlement in the 1830s until 1887 as Big Shanty, it became Kennesaw under its 1887 charter. According to the 2010 census, Kennesaw had a population of 29,783, but in 2019 it had a population of 34,077 showing a 14.4% increase in population over the past decade. Kennesaw has an important place in railroad history. During the Civil War, Kennesaw was the staging ground for the Great Locomotive Chase on April 12, 1862. The city is perhaps best known nationally today for its mandatory gun-possession ordinance requiring all households in Kennesaw to have a gun, with certain exceptions.

As the Western and Atlantic Railroad was being built in the late 1830s, shanties arose to house the workers. These were near a big spring. A grade up from the Etowah River became known as "the big grade to the shanties", then "Big Shanty Grade", and finally "Big Shanty".

The name "Kennesaw" is derived from the Cherokee word gah-nee-sah, meaning cemetery or burial ground.

Civil War and after

During the Civil War, Big Shanty was the site of major fighting in the Battle of Kennesaw Mountain, part of the larger Atlanta Campaign. Kennesaw Mountain National Battlefield Park, located southeast of the city limits, now contains many of these historic areas, though much of the surrounding land has been developed, and some buried artifacts have been taken by people with metal detectors.

L.C. Chalker purchased a 1.25-acre (0.51 ha) tract of land adjacent to the Kennesaw Cemetery from J.W. Ellis in 1934, which was sold for burial purposes. Chalker purchased another 1 acre (0.40 ha) adjacent to the first parcel in 1948, which was also to be used for a cemetery. The Chalker family managed these portions of the cemetery until they were sold to the City of Kennesaw in the mid 1950s. The earliest known burial is the infant Lucius B. Summers, who was interred in 1863. Other grave markers date as far back as the 1860s to the 1890s. Civil War veterans are buried here. The cemetery is still in use.

The Southern Museum of Civil War and Locomotive History is located downtown, next to the Western and Atlantic Railroad tracks on Cherokee Street, just off Main Street (old U.S. 41 and State Route 3). The museum is the current preservation and display location for The General, the locomotive that played the key role in the Great Locomotive Chase (The Texas which chased it is at the Atlanta Cyclorama).

Kennesaw is located in northwestern Cobb County, bordered by the city of Acworth to the northwest. Kennesaw Mountain is located southeast of the city limits in the battlefield park. Its summit is the highest point in the Atlanta metro area, at an elevation of 1,808 feet (551 m) above sea level. The city was renamed for the mountain.

Kennesaw is noted for its unique firearms legislation in response to Morton Grove, Illinois' law mandating gun prohibition. In 1982 the city passed an ordinance [Sec 34-21] 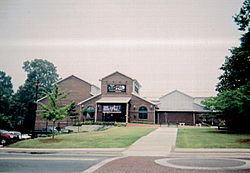 Several festivals are held annually. Every April the annual Big Shanty Festival displays over 200 arts and crafts booths along with 20 food booths downtown featuring several local businesses and entrepreneurs. Over 60,000 people from around North Georgia attend the festival. The festival begins with a parade through downtown.

Public schools are provided by the Cobb County School District.

Kennesaw State University is located within the city and is part of the University System of Georgia.

In 2016, the Atlanta Blaze of Major League Lacrosse played their first year of play as an expansion franchise with home games at Fifth Third Bank Stadium on the campus of Kennesaw State University. The team relocated in 2019.

All content from Kiddle encyclopedia articles (including the article images and facts) can be freely used under Attribution-ShareAlike license, unless stated otherwise. Cite this article:
Kennesaw, Georgia Facts for Kids. Kiddle Encyclopedia.