Cartersville was first known as Birmingham to its original English settlers. The town was incorporated as Cartersville in 1854. The present name is for Col. F. Carter of Milledgeville.

Cartersville was designated the seat of Bartow County in 1867 following the destruction of Cassville by Sherman in the American Civil War. Cartersville was incorporated as a city in 1872.

The Etowah River flows through a broad valley south of the downtown, leading west to Rome, where it forms the Coosa River, a tributary of the Alabama River. The city limits extend eastward, upriver, as far as Allatoona Dam, which forms Lake Allatoona, a large U.S. Army Corps of Engineers reservoir. Red Top Mountain State Park sits on a peninsula in the lake, just outside the city limits. Nancy Creek also flows in the vicinity.

Downtown Cartersville consists of several amenities such as shopping, theatres, museums, churches, and restaurants. This downtown district is very small and historic, which is what makes this small town invite-able. The Grand Theatre holds shows for several schools and companies, such as the Steps of Faith Dance Company and Cartersville City Ballet. There are also pageants and scholarship programs that are held here, such as Distinguished Young Women. Downtown Cartersville also has annual Christmas parades and monthly car shows.

The following communities border the city: 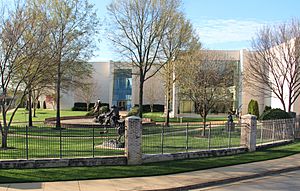 Manufacturing, tourism, and services play a part in the economy of the city. The city's employers include:

The city is home to Cartersville Medical Center and The Hope Center, making it a minor healthcare hub for the surrounding area.

The schools that comprise the Cartersville City School System are:

There is also a private Montessori school:

Cartersville also has a college campus:

All content from Kiddle encyclopedia articles (including the article images and facts) can be freely used under Attribution-ShareAlike license, unless stated otherwise. Cite this article:
Cartersville, Georgia Facts for Kids. Kiddle Encyclopedia.