Calhoun was a part of the Cherokee Nation (including New Echota, capital of the Cherokee Nation) until December 29, 1835. Cherokee leaders such as The Ridge and William Hicks had developed numerous productive farms in the fertile Oothcaloga Valley. When the Cherokee refused to give up the remainder of their lands under the Indian Removal Act, after years of land cessions to the United States for white settlers in Georgia, North Carolina and Tennessee, President Andrew Jackson sent US troops to the northern region of Georgia to force most of the tribe to move to Indian Territory west of the Mississippi River, most notably present-day Oklahoma. (See more information on Trail of Tears.)

In December 1827, Georgia had already claimed the Cherokee lands that became Gordon County and other counties. A small town called "Dawsonville" was created and founded in the Gordon County, named for the owner of an early general store. Dawsonville was later renamed "Calhoun" to honor U.S. Senator John C. Calhoun, following his death in 1850.

Gordon County's inferior court called an election for the selection of the county seat, offering voters a choice between a site on the Western & Atlantic Railroad (near Adairsville) or a site more centrally located within the county. Voters chose a site along the railroad, so the inferior court designated Calhoun as county seat in 1851. The legislature incorporated Calhoun in an act approved on January 12, 1852.

On January 5, 1861, Georgia seceded from the Union as a prelude to the American Civil War. Calhounians joined the Confederacy. Most warfare took place elsewhere, but on May 16, 1864, Calhoun was near where the Union General William Tecumseh Sherman and Confederate General Joseph E. Johnston postured before the Battle of Adairsville during Sherman's Atlanta Campaign. Oakleigh, the home of Dr. Wall, was used by Sherman as his headquarters at that time.

A tornado on March 20, 1888, leveled much of Calhoun. A devastating fire on October 23 of that year destroyed most of what remained.

The climate in this area is characterized by relatively high temperatures and evenly distributed precipitation throughout the year. According to the Köppen Climate Classification system, Calhoun has a humid subtropical climate, abbreviated "Cfa" on climate maps. 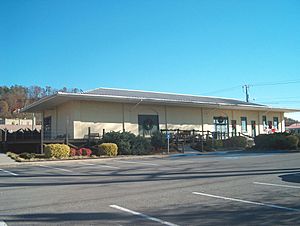 Calhoun Railroad Depot was one of the train stations in 1862 where the Great Locomotive Chase passed from Adairsville, Georgia. 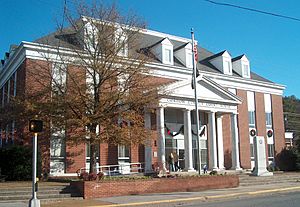 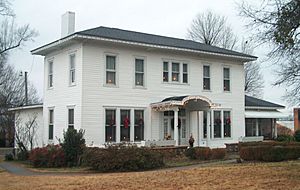 Oakleigh, once a headquarters of General Sherman and home of Dr. Wall, now Gordon Historical Society

The Calhoun City School District serves preschool to grade twelve, and consists of two elementary schools, a middle school, and a high school, separate from the county school district. The district has 166 full-time teachers and over 2,666 students.

The Gordon County School District holds grades pre-school to grade twelve, that consists of six elementary schools, two middle schools and two high schools, serving the area outside the city limits. The district has 365 full-time teachers and over 6,259 students.

All content from Kiddle encyclopedia articles (including the article images and facts) can be freely used under Attribution-ShareAlike license, unless stated otherwise. Cite this article:
Calhoun, Georgia Facts for Kids. Kiddle Encyclopedia.