Sequoia is a genus of redwood trees in the Cupressaceae family. It includes the largest trees in the world. The only living species of the genus is the Sequoia sempervirens, in northern California and southern Oregon in the United States. Several other species have been named from fossils, but are now extinct. These include Sequoia affinis, Sequoia chinensis in China, Sequoia langsdorfii, Sequoia dakotensis of South Dakota, and Sequoia magnifica. Other related species of the subfamily Sequoioideae include Sequoiadendron Giganteum, the Giant Sequoia and Metasequoia Glyptostroboides, the Dawn Redwood. 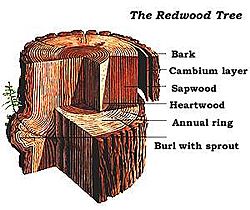