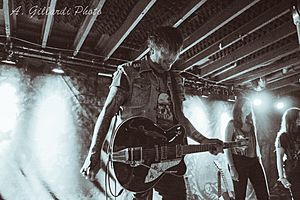 Walker worked as a guitarist and performer in several rock bands in the 80s.

Along with Jayce Fincher and Mitch McLee, Wlaker formed a new band called Floyd's Funk Reviva, Their final concert was on 2001.

Walker began a solo career, releasing the albums Left of Self-Centered in 2002, he played a series of live shows with just acoustic guitar and vocals.

All content from Kiddle encyclopedia articles (including the article images and facts) can be freely used under Attribution-ShareAlike license, unless stated otherwise. Cite this article:
Butch Walker Facts for Kids. Kiddle Encyclopedia.