Avril Ramona Lavigne (born September 27, 1984) is a Canadian singer, songwriter, fashion designer, and actress. Lavigne was born in Belleville, Ontario. At age 17, she released her first album called Let Go. Let Go reached number one on the UK and Australian album charts. Lavigne later released the albums Under My Skin in 2004, The Best Damn Thing in 2007, and Goodbye Lullaby in 2011, she released Here's to Never Growing Up in 2013. The last album is self-titled and is been released in November 5, 2013. In 2004, she won a World Music Award for favorite pop/rock artist.

Lavigne has done various other things in addition to singing. For instance, in 2006, Lavigne voiced a character in the movie Over the Hedge. Lavigne has also appeared in the 2006 movie Fast Food Nation. She has a clothing line, Abbey Dawn, and has released three perfumes.

She was born in Napanee, Ontario to Jean-Claude Joseph Lavigne and Judy Lavigne. She has an older brother, Matthew Lavigne and younger sister, Michelle. Her father is French Canadian and her mother is of English, German and Scottish descent.

In 1999, Avril won a competition to sing with Shania Twain in Ottawa, Canada. She debuted when a recording artist saw her singing country songs in a book store.

In June 2002, Avril released her first album, Let Go. It got to number one in Canada, Australia and the United Kingdom, and number two in the United States. Two months later, she won an award for the music video "Complicated", the first single from Let Go. She had her first success with "Complicated", "Sk8er Boi" and the first two singles from Let Go both entered the top 10 in the music charts. The next February, she was nominated for five Grammy Awards, but won none. Thanks to the success of her first three singles, Complicated, Sk8er Boi and I'm with You, Lavigne, then a teenager, became the second artist in history to have three number 1 songs from a first album on the Billboard Mainstream Top 40.

In May 2004, her second album, Under My Skin was released. After that, on Total Request Live, she was rude to journalists after being asked for her opinions of the media. Other times she was violent. Lavigne and Matthew Gerrard also wrote the song "Breakaway", which became a hit for Kelly Clarkson.

Under My Skin, was released on 25 May 2004. It debuted at No. 1 in many countries, including Australia, Mexico, Canada, Japan, the UK, and the U.S. The album has sold more than 10 million copies. Lavigne wrote most of the album's tracks with Canadian singer-songwriter Chantal Kreviazuk. Kreviazuk's husband, Our Lady Peace front man Raine Maida, co-produced the album. Butch Walker and Don Gilmore were the other producers. Lavigne went on the Live and By Surprise twenty-one city mall tour in the U.S. and Canada to promote the album. She was accompanied by her guitarist, Evan Taubenfeld. Each performance had live acoustic versions of the new songs. At the end of 2004, Lavigne went on her first world tour, the Bonez Tour. She had shows on almost every continent. The tour lasted for the entire 2005 year.

Lavigne won two World Music Awards in 2004 for "World's Best Pop/Rock Artist" and "World's Bestselling Canadian Artist". She received five Juno Award nominations in 2005 of which she won three, including "Artist of the Year". She won the award for "Favorite Female Singer" at the eighteenth annual Nickelodeon Kids' Choice Awards and was nominated in every MTV Award show shown around the world. 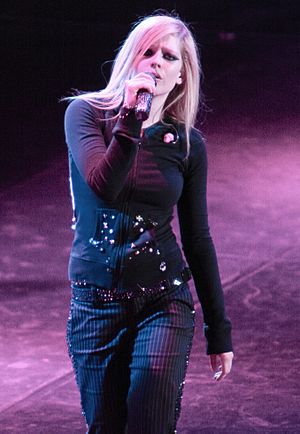 Lavigne in Beijing, 2007, performing in The Best Damn Tour

In April 2007, her third album, The Best Damn Thing was released. The album was the first to carry a parental advisory warning due to repeated use of swear words. Avril described the album as "fast, fun, young, bratty, aggressive, confident, cocky in a playful way ... all the good stuff." "Girlfriend", the first single from the album, got to number one in seven countries. She was sued because a different band already had a song called "I Wanna Be Your Boyfriend." Avril sang in "Girlfriend": "I want to be your girlfriend". She then went on a world tour, known as The Best Damn Tour.

A month after The Best Damn Tour was completed, Lavigne began recording in her home studio in November 2008 with the song "Black Star". It was written to promote her first fragrance also called Black Star. By July 2009, she had recorded nine tracks of the new album. These songs included "Everybody Hurts" and "Darlin". Lavigne had written some of these songs when she was young. "Darlin" was written by her when she was 15 years old, and living in Napanee, Ontario. Lavigne said the album was about "life". She said that it was easy for her to do a "boy-bashing pop song," but it was different to write about something "that's really close to me, something I've been through." Other than the album's lead single, "What the Hell", Lavigne described the songs on Goodbye Lullaby as different from her earlier songs. She said she was older, so her music was not so pop-rock now.

In January 2010, when she was writing and recording for the new album, Lavigne worked with Disney. This was on clothing designs inspired by those in Tim Burton's feature movie, Alice in Wonderland. She asked the executives if she could write a song for the movie. So, she wrote the song "Alice". It was played over the end credits. It was also included on the soundtrack, Almost Alice.

On 28 February, Lavigne performed at the concert portion of the Vancouver 2010 Winter Olympics closing ceremony. She sang "My Happy Ending" and "Girlfriend".

The release dates for Goodbye Lullaby and its lead single were pushed back many times. Lavigne explained these delays. She said, "I write my own music and, therefore, it takes me longer to put out records 'cause I have to live my life to get inspiration." She added that she had enough material for two records. In November, Lavigne said in Maxim, that Goodbye Lullaby took two and a half years to complete. She said her record company had led to the delays. She added that the album had been completed for a year. Goodbye Lullaby was released on 8 March in the US. The lead single, "What the Hell", premiered on Dick Clark's New Year's Rockin' Eve on 31 December.

On 1 November 2013, Sony Music Entertainment released Lavigne's fifth studio album Avril Lavigne. Four singles have been released from it: "Here's to Never Growing Up", "Rock n Roll", "Let Me Go", and "Hello Kitty". "Hello Kitty" was talked about badly by a lot of people.

Lavigne is also a citizen of France. During her childhood, she was diagnosed with attention-deficit hyperactivity disorder. She takes Ritalin since then.

The couple married in a Roman Catholic ceremony on July 15, 2006, at a private estate in Montecito, California. Lavigne wore a Vera Wang gown and carried pearl white Australian roses. The people who came were members of band Sum 41, Matthew Lavigne (Avril's older brother), and Sum 41's close friend Robb Dipple. Avril's younger sister Michelle Lavigne was one of Avril's bridesmaids. The song "Iris" by the Goo Goo Dolls was played as their wedding song. When asked if they were ready to have children, they said "not right now, but somewhere down the road." On September 17, 2009, Avril Lavigne announced that she and Whibley split up, and divorce papers would soon follow. In September 2009 Lavigne and Whibley were officially separated after two and a half years together. On October 9, 2009, Lavigne filed for divorce.

In February 2012, Lavigne began dating Nickelback lead singer Chad Kroeger. Lavigne announced that she and Kroeger were engaged in August 2012. They married on July 1, 2013.

All content from Kiddle encyclopedia articles (including the article images and facts) can be freely used under Attribution-ShareAlike license, unless stated otherwise. Cite this article:
Avril Lavigne Facts for Kids. Kiddle Encyclopedia.