Billie Eilish Pirate Baird O'Connell ( EYE-lish; born December 18, 2001) is an American singer-songwriter. She first gained attention in 2015 when she uploaded the song "Ocean Eyes" to SoundCloud, which was subsequently released by the Interscope Records subsidiary Darkroom. The song was written and produced by her brother Finneas O'Connell, with whom she collaborates on music and live shows. Her debut EP, Don't Smile at Me (2017), became a sleeper hit, reaching the top 15 in the US, UK, Canada, and Australia.

Eilish's debut studio album, When We All Fall Asleep, Where Do We Go? (2019), debuted atop the US Billboard 200, reached number-one in the UK, and became one of the best-selling albums of 2019. The album's fifth single "Bad Guy" became her first number-one song on the Billboard Hot 100. In 2020, she performed the theme song "No Time to Die" for the James Bond film of the same name, which became her first number-one single in the UK. Her later singles "Everything I Wanted", "My Future", and "Therefore I Am" peaked within the top 10 in the US and UK.

Her accolades include seven Grammy Awards, two American Music Awards, two Guinness World Records, three MTV Video Music Awards, and one Brit Award. She is the youngest person and the second in history to win the four main Grammy categories—Best New Artist, Record of the Year, Song of the Year and Album of the Year—in the same year. In 2019, Time magazine placed her on their inaugural Time 100 Next list. Eilish is the 26th-highest-certified artist of the digital singles era, according to the RIAA. 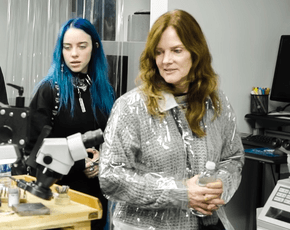 With her mother Maggie Baird in Atlanta, Georgia

Billie Eilish Pirate Baird O'Connell was born on December 18, 2001, in Los Angeles, California. She is the daughter of teacher, actress, and screenwriter Maggie Baird, and construction worker Patrick O'Connell, who worked part-time as an actor, appearing in films like Iron Man (2008). Both her parents are amateur musicians. She is of Irish and Scottish descent. The singer's middle name, Eilish, was originally meant to be her first name, while Pirate (proposed by her brother Finneas, four years her senior) was to be her middle name. She was conceived via in vitro fertilization. She was brought up in the Highland Park neighborhood of Los Angeles.

While she was homeschooled, her mother taught her and Finneas the basics of songwriting. O'Connell and her brother had worked together on some music, while he had been writing and producing his own songs and performing with his band. O'Connell said her brother and her mother inspired her to get into music. Their parents encouraged the siblings to express themselves and explore whatever they wanted, including art, dancing and acting. O'Connell wrote her first "real" song at age 11 for her mother's songwriting class. The song is about the zombie apocalypse, inspired by the television series The Walking Dead from which she took script lines and episode titles that she added to the song as part of the assignment. O'Connell had gone on some acting auditions, which she disliked; however, she enjoyed recording background dialogue for crowd scenes and worked on the films Diary of a Wimpy Kid, Ramona and Beezus, and the X-Men series. She performed at talent shows and joined the Los Angeles Children's Chorus at age eight.

Eilish has an older brother, Finneas, who worked with her on some of her musical projects. She was part of the Los Angeles Children's Chorus and was home-schooled with her brother. Her mother is actress Maggie Baird.

All content from Kiddle encyclopedia articles (including the article images and facts) can be freely used under Attribution-ShareAlike license, unless stated otherwise. Cite this article:
Billie Eilish Facts for Kids. Kiddle Encyclopedia.