The James Bond series focuses on a fictional British Secret Service agent created in 1953 by writer Ian Fleming, who featured him in twelve novels and two short-story collections. Since Fleming's death in 1964, eight other authors have written authorised Bond novels or novelizations. The latest novel is Trigger Mortis by Anthony Horowitz, published in September 2015. Additionally Charlie Higson wrote a series on a young James Bond, and Kate Westbrook wrote three novels based on the diaries of a recurring series character, Moneypenny.

The character has also been adapted for television, radio, comic strip, video games and film. The films are the longest continually running film series of all time and have grossed over $7.040 billion in total, making it the fourth-highest-grossing film series to date, which started in 1962 with Dr. No, starring Sean Connery as Bond. As of 2023, there have been twenty-four films in the series.

The most recent Bond film, Spectre (2015), stars Daniel Craig in his fourth portrayal of Bond; he is the sixth actor to play Bond in the series. In 2015 the series was estimated to be worth $19.9 billion, making James Bond one of the highest-grossing media franchises of all time.

The Bond films are renowned for a number of features, including the musical accompaniment, with the theme songs having received Academy Award nominations on several occasions, and two wins. Other important elements which run through most of the films include Bond's cars, his guns, and the gadgets with which he is supplied by Q Branch. 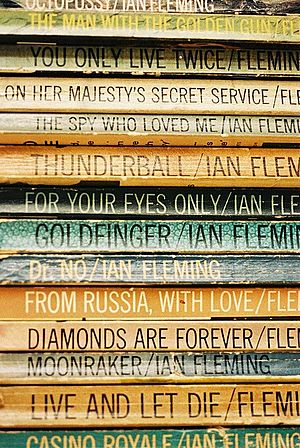 Ian Fleming created the fictional character of James Bond as the central figure for his works. Bond is an intelligence officer in the Secret Intelligence Service, commonly known as MI6. Bond is known by his code number, 007, and was a Royal Naval Reserve Commander. Fleming based his fictional creation on a number of individuals he came across during his time in the Naval Intelligence Division during the Second World War, admitting that Bond "was a compound of all the secret agents and commando types I met during the war".

Fleming endowed Bond with many of his own traits, including sharing the same golf handicap, the taste for scrambled eggs and using the same brand of toiletries. Bond's tastes are also often taken from Fleming's own as was his behaviour, with Bond's love of golf and gambling mirroring Fleming's own. Fleming used his experiences of his espionage career and all other aspects of his life as inspiration when writing, including using names of school friends, acquaintances, relatives and lovers throughout his books. 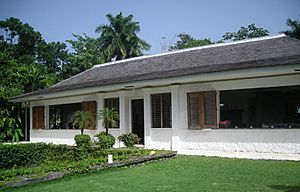 Goldeneye, in Jamaica, where Fleming wrote all the Bond novels

Whilst serving in the Naval Intelligence Division, Fleming had planned to become an author and had told a friend, "I am going to write the spy story to end all spy stories." On 17 February 1952, he began writing his first James Bond novel, Casino Royale, at his Goldeneye estate in Jamaica, where he wrote all his Bond novels during the months of January and February each year.

Between 1953 and 1966, two years after his death, twelve novels and two short-story collections were published, with the last two books – The Man with the Golden Gun and Octopussy and The Living Daylights – published posthumously. All the books were published in the UK through Jonathan Cape. 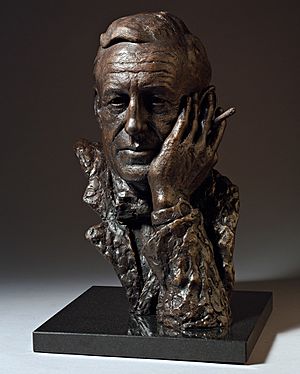 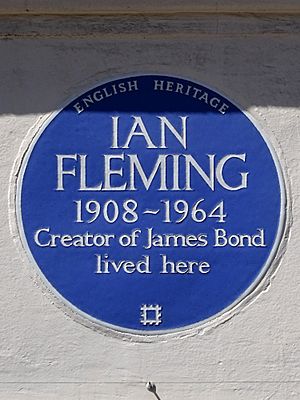 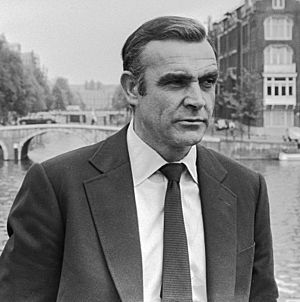 Sean Connery 1971 in the Bond film "Diamonds are Forever"

In 1962 Albert. R. "Cubby" Broccoli and Harry Saltzman started to produce the first James Bond movie, Dr. No, starring Sean Connery as James Bond. The movie became extremely popular, and they continued to make more Bond movies. In the end of the 1960s Connery did not want to do any more Bond movies, and many thought that Bond was now dead. In 1969, George Lazenby appeared in one movie as the Bond character, but the movie was not successful.

In 1971 Sean Connery stepped back into the role for one movie "Diamonds are Forever". After this in 1973, producers came up with the Live and Let Die movie, starring Roger Moore as Bond. The movie became a very big success. The series continued throughout the 1970s and 1980s with Roger Moore playing the role of Bond.

In the 1980s, Bond movies were not as successful at the box office. Unlike the 1960s and 1970s, in the 1980s there were many other action movies being produced that could compete with the Bond series.

After Moore left the role as Bond, he was replaced with Timothy Dalton in the late 1980s. Dalton tried to make a serious, "down to earth" Bond, closer to the Fleming novels. Fans did not like Dalton's interpretation of the Bond character, and the movies made little money.

In 1995, producers developed the Goldeneye movie, starring Pierce Brosnan as Bond. This film made the Bond character well known in the 1990s. Brosnan appeared in several Bond movies. 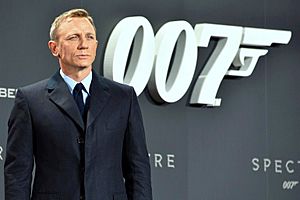 The James Bond character was used in the 20th movie in 2002, Die Another Day, the 40th anniversary of the movies and the 50th anniversary since Fleming wrote his first Bond novel, in 2006, the 21st movie, Casino Royale, was released. Pierce Brosnan, who played James Bond in the previous four movies, was replaced by Daniel Craig, the first James Bond to have blonde hair.

The movie is based on the first Ian Fleming novel of the same name, but is set in the present day. It has a new model of Aston Martin DB9, the car that made James Bond so famous in the 1960s. Many fans think that whilst this movie is different than other movies, it is much better, and movies in the future (however few there will be) will be in this new format. In 2008, Craig appeared in a second Bond movie, Quantum of Solace and a third, Skyfall, in 2012. His fourth appearance as Bond was with Spectre in 2016.

All content from Kiddle encyclopedia articles (including the article images and facts) can be freely used under Attribution-ShareAlike license, unless stated otherwise. Cite this article:
James Bond Facts for Kids. Kiddle Encyclopedia.