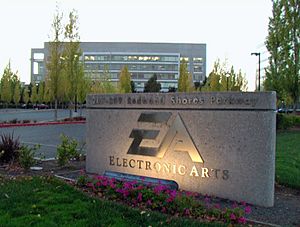 Electronic Arts, Inc. (EA) is a large company which makes computer and video games all over the world. They made famous games such as The Sims, Madden NFL and Medal of Honor. They also made the Need for Speed series. EAs most popular products are the games which are sold under the EA Sports label.

The company was started in February 1982 by Trip Hawkins. They first shipped their games in May 1983. They have since then produced video games every year.

EA owns other smaller game companies which they call 'studios'.

All content from Kiddle encyclopedia articles (including the article images and facts) can be freely used under Attribution-ShareAlike license, unless stated otherwise. Cite this article:
Electronic Arts Facts for Kids. Kiddle Encyclopedia.