The Sims facts for kids

The Sims is a video game released in 2000 . It is a life simulator that imitates real life. Sims can get jobs, have needs, and can get married. It was the third best selling computer and video game of all time (it mostly sold well on the computer). 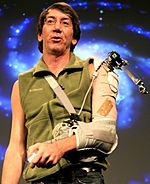 The Sims was created by Will Wright, who worked at Maxis, which was owned by EA Games. It was first released in February 2000. His intention was to make an open-ended game without a set objective. This feature was the reason why it attracted so many gamers.

The first part of the game is to make a family, or play one of the preexisting families. Every family can have children and adults. A player can choose what they look like from many different clothes and hair styles. Each family must include at least one adult.

Each family starts with $20,000, irregardless of how many sims are in the family. After the family is made, the player can move them into a lot. Some lots are empty while other lots have houses on them.

There are many different floor coverings, wall coverings and doors to choose from when building a house. After building, the player can purchase objects, such as a refrigerator, bed, or other things.

Players control the Sims in Live Mode. The main goal is to keep the Sim's eight needs up and in the green. These needs eventually go down as time goes by. If Sims have no energy, they will fall to the ground. If they are swimming and run out of energy they will drown. If they are too hungry, they will die of starvation.

Other goals include making money (called Simoleons in this game). Sims must get jobs to get more money so they can pay bills, buy new objects, and expand the house. If they do not go to work two days in a row, they will be fired. Each Sim has eight skill levels to work towards. Each skill level has 10 points. For instance, in the military job, the ultimate requirement is 10 body points. Jobs also require a certain number of friends to receive a promotion. The higher they go, the more money they make per day.

Children must go to school. If they do not keep their grades up, they will be sent to military school and will never return. They can read books to study.

The Sims is well known for having many expansion packs, or smaller games that add onto the main game. The player must own the original game to buy and install these packs. The Sims has 7 official expansion packs.

After it sold well on the computer, it was put on other platforms such as the PlayStation 2, PlayStation Portable, GameCube and Xbox. The console releases are:

These all follow a different concept. They are more objective-based rather than free-willed and have not been as popular as the original PC editions.

All content from Kiddle encyclopedia articles (including the article images and facts) can be freely used under Attribution-ShareAlike license, unless stated otherwise. Cite this article:
The Sims Facts for Kids. Kiddle Encyclopedia.