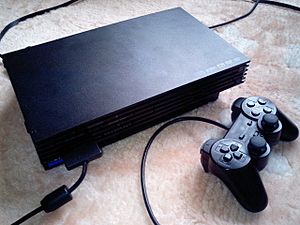 The PSX was released in 2003. It was a video recorder that allowed you to play PlayStation 2 games. It had a built-in hard drive (up to 250 GB). It did not sell well, because it cost too much money, so was not released outside of Japan. Grand Theft Auto: San Andreas became the most sold game, with over 27.5 million copies sold.

All content from Kiddle encyclopedia articles (including the article images and facts) can be freely used under Attribution-ShareAlike license, unless stated otherwise. Cite this article:
PlayStation 2 Facts for Kids. Kiddle Encyclopedia.