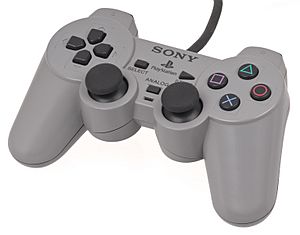 The DualShock is a video game controller made by Sony for the PlayStation line of game consoles. It was first released in Japan in 1997, and was later released in North America in 1998. It is a vibration-feedback controller, meaning that it shakes in appropriate situations during a game. The name comes from the fact that it has two vibration motors. The motors are in the handles of the controller.

All content from Kiddle encyclopedia articles (including the article images and facts) can be freely used under Attribution-ShareAlike license, unless stated otherwise. Cite this article:
DualShock Facts for Kids. Kiddle Encyclopedia.