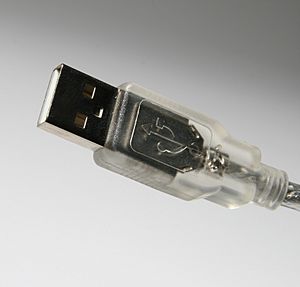 A USB Type A plug

The Universal Serial Bus (USB) is technology that allows a person to connect an electronic device to a computer. It is a fast serial bus.

It is mostly used on personal computers. USB is also used on other devices, such as smartphones and video game consoles. USB connects different devices using a standard interface.

Most people use USB for computer mice, keyboards, scanners, printers, digital cameras, and USB flash drives. There are over six billion USB devices around the world.

USB can provide a small amount of power to the attached device through the USB cord. Devices that only need a little power can get it from the bus, and do not need a separate electric power plug. That allows gadgets like USB battery chargers, lights, and fans.

As of 2015, USB has mostly replaced several older standards. Those include the parallel port, serial port and SCSI. These old standards are still used for a few jobs where USB cannot replace them. 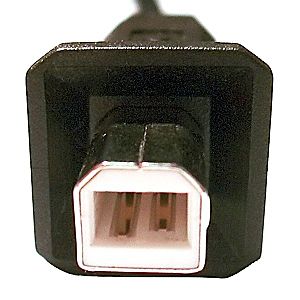 The first version of the Universal Serial Bus was created in 1995. This new technology became an instant success. Since the introduction of USB, people that make electronic devices thought about how it could be used in the future. Today, USB connects a computer or other devices like laptops and MP3 players to peripheral devices.

The bus was introduced by seven companies which represent the leaders in the industry of information technology: Compaq, IBM, Intel, Microsoft, NEC, Northern Telecom, and Digital Equipment Corporation (DEC).

Several years earlier, adopters and developers of USB held a meeting called Plugfest at a special hotel in California to test their devices. They selected a hotel that included rooms for sleeping and for testing. The meeting lasted three days. During the meeting, the representatives of about 50 companies connected their USB devices to one general host system.

The logo of the USB device also has its own history. The USB logo was in development for several months.

In order to use the hi speed transfer rate, the USB controller and the connected device both need to support it. USB is backwards compatible. Faster and slower USB devices and controllers can be connected together, but they will run at the slower speed. 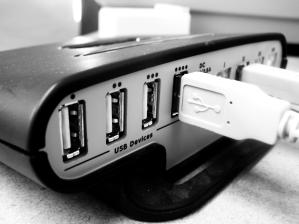 Almost all computers sold today have USB ports, and most of them support USB 2.0 or later. The number of ports they have is usually limited, though. Between two and six ports are common. USB allows connecting USB hubs to add more USB ports. 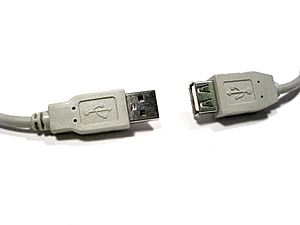 A Series "A" connector and receptacle. 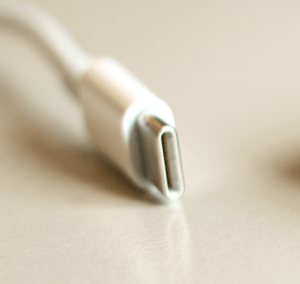 USB was designed to be easy to use. The engineers learned from other connectors before they designed USB connectors. There are 3 connectors. 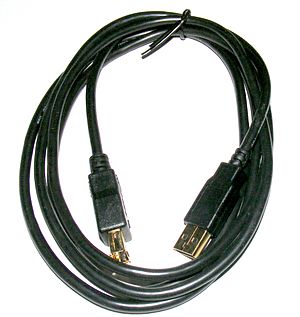 How USB is done

A USB system has an asymmetric design. It is made of a host, several downstream USB ports, and multiple peripheral devices connected in a star topology. Additional USB hubs may be included in the tiers, allowing branching into a tree structure with up to five tier levels.

USB devices are linked in series through hubs. There is always one hub known as the root hub. The root hub is built into the host controller. There are special hubs, called "sharing hubs". These allow multiple computers to access the same peripheral devices. They work by switching the access between PCs, either manually or automatically. They are popular in small-office environments. In network terms, they converge rather than diverge branches. 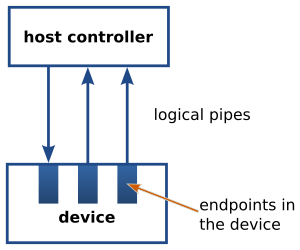 USB endpoints are actually on the connected device: the channels to the host are referred to as pipes.

USB device communication is based on pipes (logical channels). Pipes are connections from the host controller to a logical entity on the device named an endpoint. The term endpoint is occasionally used to incorrectly refer to the pipe. A USB device can have up to 32 active pipes, 16 into the host controller and 16 out of the controller.

Each endpoint can transfer data in one direction only, either into or out of the device, so each pipe is uni-directional. Endpoints are grouped into interfaces and each interface is associated with a single device function. An exception to this is endpoint zero, which is used for device configuration and which is not associated with any interface.

The computer hardware that contains the host controller and the root hub has an interface for the programmer. It is called Host Controller Device (HCD) and is defined by the hardware implementer. 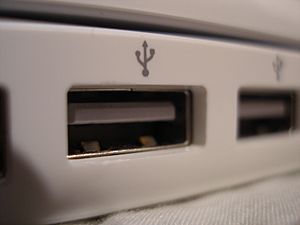 VIA Technologies licensed the UHCI standard from Intel; all other chipset implementers use OHCI. UHCI relies more on software. This means UHCI is slightly more processor-intensive than OHCI but easier and cheaper to make. Because there were two different implementations, operating system vendors and hardware vendors needed to develop and test on both of them. This increased cost.

The USB specification does not specify any HCD interfaces and is not concerned with them. In other words, USB defines the format of data transfer through the port, but not the system by which the USB hardware communicates with the computer it sits in.

During the design phase of USB 2.0, the USB-IF insisted that there was only one implementation. The USB 2.0 HCD implementation is called the Enhanced Host Controller Interface (EHCI). Only EHCI can support hi-speed (480 Mbit/s) transfers. Most of PCI-based EHCI controllers have other HCD implementations called 'companion host controller' to support Full Speed (12 Mbit/s) and may be used for any device that claims to be a member of a certain class. An operating system is supposed to implement all device classes, so it can provide generic drivers for any USB device. Device classes are decided upon by the Device Working Group of the USB Implementers Forum.

All content from Kiddle encyclopedia articles (including the article images and facts) can be freely used under Attribution-ShareAlike license, unless stated otherwise. Cite this article:
USB Facts for Kids. Kiddle Encyclopedia.